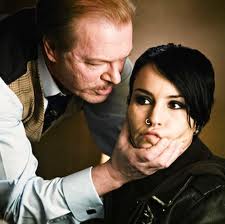 
On one of my ARCHETYPAL ARCHIVE posts, entitled THRILLER KILLING, I wrote:


the SILENCE OF THE LAMBS film also seems to have more in common with the suspense genre than that of horror. Hannibal Lecter is certainly mad, but it's questionable as to whether his madness is as grotesque and transformational as that of Norman Bates. Both characters inhabit essentially realistic worlds, but Hannibal's madness has far less mystery to it.

If I ever get around to reviewing the 1991 SILENCE I'll be reversing the above judgment.  Though it's true that in narrative terms SILENCE owes a lot to the structure of the "serial-killer thriller," I've determined that the madness of "Hannibal the Cannibal" is just as grotesque, etc., as that of Norman Bates, and that both SILENCE and PSYCHO belong in the ranks of metaphenomenal "psycho-films."

Not so THE GIRL WITH THE DRAGON TATTOO, however.

I viewed DRAGON (henceforth the abbreviation for the David Fincher-directed version only) without having either read the Steig Larsson novel or seen any of the earlier Swedish film adaptations. Immediately I found myself intrigued at seeing how many tropes of the serial-killer thriller have been inverted in the Fincher film.

For instance, as I've brought up Jonathan Demme's SILENCE already, I may as well use it as a counter-example (though I'm not proposing any direct influence between it and any version of the Larsson story).

Whereas many psycho-films have involved female victims relentlessly pursued by mad murderers (usually though not invariably male), SILENCE's female lead is FBI agent Clarice Starling, who makes her business to pursue the psycho known as "Buffalo Bill."  However, to do so, she must play a game of "quid pro quo" with another serial slayer, the charismatic Hannibal Lecter.  Lecter's help does enable Starling to bring down her target, though by film's end Hannibal escapes to "bite another day," so to speak.  One leaves this particular film with the sense of a strange hero/villain relationship having been forged between Starling and Lecter.

DRAGON allows no such romanticism.  The "girl" of the title, young Lisbeth Salander, ends up helping her co-protagonist Mikael Blomkvist expose a psycho in the latter half of the film, but she never has any love-hate relationship with this serial killer.  Initially Lisbeth pursues the killer because Blomkvist has hired her to help him research the fate of a young girl who disappeared from a wealthy Swedish home forty years ago.  However, as Lisbeth and Mikael make connections between the missing girl and a rash of unsolved serial killings, Lisbeth becomes an avenger of All Wrongs Done to Women.  The psycho-killer, for his part, isn't a compelling figure like Hannibal or Norman Bates; his lust to kill women, at least as portrayed in Fincher's DRAGON, seems less his particular psychology than the embodiment of All Patriarchal Oppression.

I don't capitalize these storytelling tropes to make fun of them; I could do the same to the personas involved in Demme's SILENCE as well, or with pretty much any other narrative.  I invoke the capitals to make clear how much Fincher, following Larsson, departs from the more standard narrative opposition of the Psycho and the Lady Victim-- who not infrequently a version of what academic Carol Clover termed "the Final Girl," the female who survives the rampage of a modern-day Bluebeard.

Indeed, the psycho in this film receives far less narrative attention than a more mundane figure of Patriarchal Oppression.  Because in earlier years the punkish Lisbeth got into trouble with the law, a government caseworker manages to gain control over her. This oppression culminates in Lisbeth's violent rape by the caseworker, a scene which Fincher dwells on in gruesome detail, presumably to prevent the viewers from dismissing it as one of many generic-looking fictional rape-scenes.  Lisbeth gains the upper hand over her oppressor, and subjects him to a punishment that fits (but does not extinguish the reality of) the crime.  In a sense, when the psychotic killer dies in the film-- indirectly due to Lisbeth's actions-- the psycho suffers the fate that the audience would like to see befall the caseworker as well.  But because Lisbeth doesn't trust the law to avenge rape, she has to satisfy herself with a less emotionally satisfying revenge.

Fincher's DRAGON is a strong thriller, although at times even he can't find that many ways to spice up the many talking-heads scenes influenced by the novel.  However, Fincher serves the source material here much better than Dan Brown was served by the cinematic adaptations of his even talkier thriller-novels.

Another note on the phenomenality employed here: late in the film, the killer employs against Blomkvist that old standard of Saturday-morning serials: the Chamber That Fills With Gas.  And if this sort of gadget were presented as a marker of the narrative's "irreducible strangeness"-- as I argued that similiar gimicks were in ACE DRUMMOND-- then such a device could qualify DRAGON to be a film of "the uncanny."  But DRAGON's villain not only isn't in a league with Hannibal and Norman, he's not even in the same league with Ace Drummond's villain-- who, by coincidence, sported the name of "The Dragon."