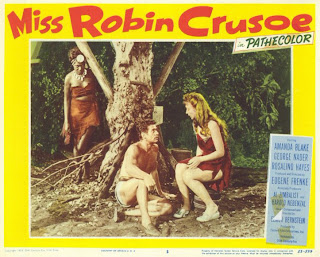 
ROBINSON CRUSOE, meet THELMA AND LOUISE.
Not really, but for the first thirty minutes of this bargain-basement, gender-switching take on the Daniel Defoe novel, the audience does see two women stranded on an island but allied in a common cause against the tyranny of men.  However, as CRUSOE is a light romance, the ladies' negative experiences with the male gender must be proven to be nothing more than Darn Bad Luck.  Thus a studly male makes it to the island as well, literally (as the lobby card above shows) coming between "Miss Robin Crusoe" and her black female companion, unimaginatively dubbed Friday (which allegedly means "day of freedom" in some country or other).

Unlike Defoe's Crusoe, Miss Robin (Amanda Blake) is shipwrecked on an island with one other survivor of her ship, a male sailor.  He immediately chases Robin with rape in mind, but she runs to the top of a cliff and manages to kill him by pushing him off. Her mental soliloquy then informs the audience that she was the only woman aboard her father's ship, and that every man aboard had been lusting for her until the day of the wreck. This experience isn't the sole reason for her hatred of men: before that, as she will inform one of her two island-companions, her drunken father drove her mother to death and forced Robin to work in a public house (implicitly as a serving-girl, though one imagines this still wasn't the best place to encounter a nice guy).  Later her nasty father took her on board the ship to save the cost of a cabin boy, but though the dead paternal unit isn't explicitly identified as having molested his daughter, he certainly put her in a position where her rape was highly probable.  One might hazard that the nameless sailor she manages to kill is a stand-in for her worthless dad.  Later the association of sex, the sea and ships will crop up again.

After managing to build herself a treehouse against the elements, Robin mopes about a while until, as in the novel, a tribe of black islanders paddle their canoes to the island in order to execute a sacrifice, the tribeswoman (Roberta Hayes) who will become Friday (and to some extent, Robin's "savage" alter ego).  Robin snatches Friday from the jaws of sacrifice and repels the black island-men with her firearms; in addition, Friday proves more than competent, killing one islander with a knife and another with a spear.  Friday, who like her people has never seen firearms before, initially regards Robin as a god. Robin modestly tries to convince her that they are equals, though the relationship, as in the novel, remains one in which Robin still gives all the orders.  Once or twice there are dim suggestions that Friday may come to have some feeling for Robin beyond friendship-- Friday looks lovingly down at a sleeping Robin Crusoe-- but I tend to think that the filmmakers were thinking less of Lesbos than of the ideal of Mammy-ism: of the phenomenon of a black woman treating a white woman as if the latter were her child.

Friday, having almost been sacrificed by a bunch of male tribesmen, enthusiastically agrees with Robin's animadversions against all men.  Enter polite male castaway Jonathan (George Nader).  Initially Robin has Friday tie the man up to prevent his trying anything, but after a little sane male reasoning she lets him go off to some other part of the island.  At the same time Robin, using tools saved from her ship's wreck, endeavors to fix the damaged two-person lifeboat in which she and the sailor arrived on the island.  Jonathan finds out about the boat and seems too interested for Robin's liking. Friday likes the new arrival even less, and fails to inform the man when he accidentally samples some poison fruit.  Ironically, this gambit backfires on Friday, as civilized Robin nurtures the hated male back to health.

However, as so often happens with the break of day after the night of passion, Robin awakes from her post-coital sleep to the sight of betrayal: Jonathan rowing away from the island in her lifeboat, leaving both Robin and Friday behind.  To say the least, this does not improve Robin's opinion of men.

Naturally, all's well that ends well: Jonathan really left so that he'd have a better chance to find a manned vessel, which he does, and he returns just in time to help Robin and Friday fight off the return of the pissed-off black islanders.  The film closes with their marriage, and though the audience never finds out what happened to Friday afterward, at least she's still alive at story's end and so isn't used for the egregious "heroic death of the loyal black servant" trope.

The scene in which the civilized white woman is "enlivened" by the savage black woman has its basis in Caucasian culture's framing of sociological terms like "savage" and "civilized," but it's not that noteworthy.  Jonathan's theft of the boat, though, is more significant, because it appears so quickly after his "theft" of Robin's virginity, and so reinforces the Robin character's association between the sea and rapacious males.  Moreover, the way that he steals the boat only after she's let down on her guard and allowed herself to be seduced has a strong folkloric vibe to it.  It's as if, as long as she's got her virgo intacta, he can't steal the boat; once she yields, he can whisk away with the prize like Heracles escaping with the girdle of Hippolyta.

As for the categorization of the film's phenomenality, the only thing that renders it a little dubious is a short scene following Jonathan's abandonment.  Robin, wandering the island full of betrayal, happens upon Friday, who has constructed a man-shaped image on the earth out of stones.  She appears to tell the future from the stones, telling Robin, "Good man come back."  Robin kicks the stones apart, whereon Friday dourly predicts, "Now bad men come."  As it happens, both predictions come true, but because it's not decisively established that Friday can predict the future-- since she could be just uttering her own fears and/or preferences-- I regard this as a species of illusionism, and hence beneath the naturalistic version of the "enthralling hypnotism and illusionism" trope.
Posted by Gene Phillips at 2:58 PM
Email ThisBlogThis!Share to TwitterShare to FacebookShare to Pinterest
Labels: combative dramas, enthralling hypnotism and illusionism (n), the naturalistic