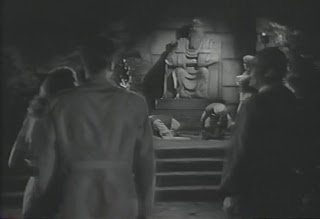 In between Kirk Alyn's two Superman serials he made two G-man serials for Republic.  In both serials, although the majority of the narratives are naturalistically oriented, there's just enough metaphenomenal content to edge them into the domain of "the uncanny."

Of the two, there's less to say about RADAR, which was the second of these two 1949 Alyn serials, so I'll start with that one.  Four years after the end of WWII, U.S. agent Chris Calvert (Alyn) is busy overseeing the construction of an up-to-date radar defense project, leaving the technical side to a rare (for serials) female scientist, Joan Hughes (Jean Dean).  The evil "Spy King" Baroda (John Merton) is out to sabotage the project, creating his own "counter-radar" among other stratagems.  Baroda doesn't seem to be employed by any country in particular to commit these acts of sabotage, and some of his dialogue with female accomplice Nitra (Eve Whitney) implied to me that he was doing it all "on spec," to impress potential employers.

John Stanley's CREATURE FEATURES GUIDE claims that Baroda's arsenal includes a nifty sounding "electro annihilator," but if it's in there I must've blinked and missed it.  I only noticed two "outre devices" that went beyond the usual mundane guns-and-fists battles.  The first is the aforementioned "counter radar," which is a marginal SF-notion, while the other involves a clever sort of gas-trap.  In the serial's best scene, Nitra conceals the gas-gadget in a hollowed-out fake encyclopedia and gives it away to Joan as a promotional item.  None of the heroes perish from this or any other stratagem by the villains, and most of the cliffhanger-resolutions are pretty weak tea.

FEDERAL follows roughly the same approximate pattern, but generates its uncanny aspects via references to the past rather than to futuristic technology.  FEDERAL begins in the made-up country of Abistahn, where villainous revolutionary Nila (Carol Forman) seeks to obtain two artifacts-- human hands made of gold-- which can be used in conjunction with an ancient statue so as to reveal a massive treasure.  With that treasure, she plans to found a criminal organization of mammoth scope, "Underworld Inc."  It sounds like something on the scale of Fu Manchu's "Si-Fan," but unfortunately Nila's only allies are dimwit gangster Gordon (Roy Barcroft) and a few other plug-uglies.  Still, Nila's mini-organization is only matched by a couple of "federal men" and a female ally, so the sides are evenly matched.

The fights are better staged than those of RADAR, and Alyn's character is a little more breezy, but the cliffhangers are still lifeless, until the last few chapters, by which time the action has moved back to Abistahn.  The introduction of a new villain at the eleventh (serial) hour injects some added life in the story, as he dopes out how the "golden hand" artifacts can be used to activate ancient mechanisms in the statue so that it will disclose the treasure.  The doom of Nila comes about due to the activation of the statue, which also contributes to the final chapter's stronger showing.

In terms of Campbellian functions, both hew toward the sociological, though it's more evident in the ancient-vs.-modern clash of cultures in FEDERAL.  Since Baroda, the terrorist-villain of RADAR, seems not to have any particular nation behind him, might one deem him a forerunner of this century's "terror cells?"

For a fuller writeup of FEDERAL MEN, check this post at Todd Gault's Serial Blog.

Posted by Gene Phillips at 1:34 PM
Email ThisBlogThis!Share to TwitterShare to FacebookShare to Pinterest
Labels: combative adventures, diabolical devices (u), the uncanny