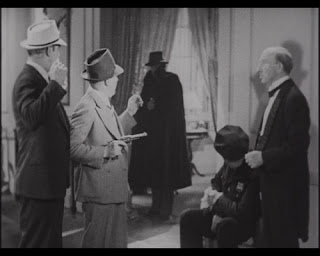 
Usually when a studio gets the rights to a serial property, the filmmakers use the first entry as a template for future entries, and only change the basic model for the hero's adventures over considerable time (if at all).  Grand National Pictures, the first film-studio ever to adapt the adventures of the pulp-magazine hero The Shadow, broke that particular mold.  After coming out with just one film showing their hero "Lamont Cranston" (or "Granston," depending on the film) as a costumed crimefighter, their very next entry in this "series" re-imagined the character as a completely down-to-earth crime reporter.

Directed by Lynn Shores (whose only other noteworthy film in my book is CHARLIE CHAN AT THE WAX MUSEUM), THE SHADOW STRIKES is adapted from a Maxwell Grant Shadow story.  Indeed, the credits for STRIKES make pointed reference to the Shadow's origins as a "Street and Smith" character, though no such reference appears in the subsequent picture.  The story is an undistinguished mystery in the vein of "Who Killed the Rich Guy This Time," with a subplot involving the heroic "Lamont Granston" looking for the murderers of his father. This is apparently this Shadow's motive for having become a crimefighter.  I gather that by the end of the story he found them, because at the close Granston's confidante/butler wonders whether or not the hero wishes to retire the Shadow costume.  Frankly, I was too bored to follow the plot that closely.

LaRoque, an actor with a long list of silent and sound credits-- none of which I've seen-- acquits himself reasonably well in the Granston role, but Shadow fans then were surely disappointed that he only changed into a Shadow-like outfit twice in the film, and only very briefly.  When he first appears in a darkened room and gets the drop on a couple of crooks, he's wearing only a black hat and a black cloak, with nothing whatever to guard his face.  Author William Gibson detailed all sorts of illusionistic devices that the prose Shadow used to make it seem as if he disappeared before his opponents' eyes.  The Grand National Shadow looks like he could be exposed by shining a flashlight in his face.

INTERNATIONAL CRIME is a very different kettle of warmed-over mystery cliches.  The mystery itself isn't much more interesting, but the actors have better lines and the direction by Charles Lamont (best known for his eight 1950s Abbott and Costello films) is much more energetic.  IMDB asserts that this story too is based on a Shadow prose tale but the credits don't go out of their way to advertise the source.

This time Lamont Cranston is a crime reporter with both a radio show and a newspaper column that go under the rubric "The Shadow Says."  As Shadow-philes know, the prose hero evolved out of a host-character who narrated crime-stories on the radio, so making the Shadow a radio-reporter at least keeps him close to his parent medium.  Curiously, though this protagonist never assumes any sort of costume, nor does he perform any Shadow-style illusions, a headshot of the Street & Smith "Shadow" appears both as a logo above Cranston's print column and in a picture on Cranston's wall.  There are occasional uses of catch-phrases from the Shadow radio-show, like "the Shadow knows" and "crime does not pay." Cranston also has two assistants reminiscent of the print-Shadow's network of operatives: taxi-driver Moe ("Moe Shrevnitz" in the pulps) and female reporter Phoebe Lane (very loosely based on "Margo Lane," conceived for the Shadow radio series in 1937).  However, whereas Moe is largely indistinguishable from his model, Phoebe Lane's character follows the pattern of the "would-be female sleuth," and is played for comedy rather than as a valuable asset.  The comedy elements in this film are its most appealing aspects: the hero seems to spend more time tweaking the noses of the dopey cops than he does ferreting out the international criminals of the title.

IMDB notes that two different production companies assembled these disparate entries, both of which were released by Grand National, so that may explain the extreme dissonance between the two LaRoque Shadows.  By my lights, despite the use of the name "the Shadow," INTERNATIONAL CRIME doesn't belong in any compendium of metaphenomenal films.  It doesn't even invoke the same "outre outfits" trope seen in STRIKES in any more naturalistic context.

The two films also diverge in terms of the Fryean mythoi I've assigned them.  Admittedly, both films are simple mysteries at heart, but STRIKES does try, however badly, to have a larger-than-life crimefighter solve the mystery, while in CRIME the ace reporter is distinctly life-size, and therefore fits the mythos of drama-- or more specifically, "melodrama."

Posted by Gene Phillips at 3:24 PM
Email ThisBlogThis!Share to TwitterShare to FacebookShare to Pinterest
Labels: combative adventures, outre outfits (u), the naturalistic, the uncanny