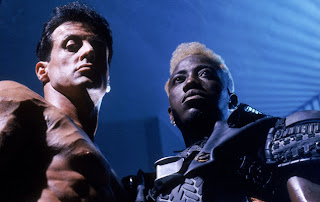 If nothing else, DEMOLITION MAN is frank about its literary swipes.  Not only do characters reference the twin inspirations for the story—“Rip Van Winkle” and “Brave New World”—Sylvester Stallone’s sidekick is even named “Huxley” after the author of the dystopian novel.  But whereas Aldous Huxley was expressing his mixed feelings over the benumbing effects of advanced technology, DEMOLITION MAN is just having silly fun with the idea of turning loose non-costumed versions of Batman and the Joker loose on such a world.

To be sure, the film has to stack the deck to make such a rampage more appealing. For instance, DEMOLITION’s future-earth of 2032 doesn’t allow recreational sex as the Huxley book does; citizens can only have the illusion of sex through a sort of “virtual reality” experience.  The film posits that following a monumental earthquake—one so great that the remnants of San Francisco and Los Angeles are merged into “San Angeles”—society makes a major shift toward extreme political correctness.  Or at least the society of San Angeles does: one never really gets any sense of what happens in the rest of the world.  In this respect DEMOLITION is a lot like 1996’s DOUBLE DRAGON, which seems hermetically sealed within a wonder-world version of L.A.

To be sure, it’s eventually revealed that this future-scape—in which money has ceased to exist and citizens are automatically fined for the action of cursing aloud—comes about due to the influence of one megalomaniacal manipulator, not in response to the normal pressures of technologized society.  By film’s end, once the manipulator’s plot is exposed, it’s intimated that the future will soon drift back in the comfortable direction of 1990s culture—or at least a Hollywoodized version of same.  In essence, “San Angeles” feels like a Hollywood scripter’s sardonic idea of what reality would look like if it were neutered in the manner that censors try to neuter films.  There’s no depth to this dystopia, but it does make an amusing backdrop for hero John Spartan (Sylvester Stallone) and madman Simon Phoenix (Wesley Snipes) as they try to tear apart both each other and the city.

The battle of these archenemies starts in 1996, with cop Spartan attempting a Dirty Harry-like feat: saving a busful of hostages from the murderous rampage of Phoenix.  Unlike Dirty Harry, Spartan not only fails, he gets framed as being complicit in Phoenix’s scheme.  Both are sentenced to imprisonment not in jail but in a cryogenic facility.  This ‘don’t-think-too-hard-about-it” notion sets up makes it possible for both the villain and the mistreated hero to be reborn a generation or two later.

Phoenix is the first to rise, because the aforesaid manipulator, having created a neutered society, needs a “primitive” to assassinate the leader of a rebel movement.  Strangely, the master manipulator—hailed by San Angeles citizens as the savior of society—is given the name “Cocteau,” which sounds strongly like an addled reference to the visionary surrealist filmmaker Jean Cocteau—addled because one wouldn’t normally associate the French director with any sort of repressive activity.  Eventually Cocteau finds himself outmatched by Phoenix as the supercriminal seeks a way to take control of the neutered future.

John Spartan is defrosted to stop Phoenix.  He’s opposed by many of the current constabulary, one of whom keeps calling him a “caveman,” even though Spartan’s only been on ice a little over thirty years.  However, junior police officer Huxley—played by Sandra Bullock one year before she made a name for herself with SPEED—becomes Spartan’s ally and guide through the maze of politically-correct customs. Spartan’s moments of “culture shock” are funny, albeit in a very silly and superficial manner. Taco Bell is the only restaurant in San Angeles because it alone survived the quake; the citizens' idea of music is bopping to the tune of old commercial jingles—stuff like that.

The muscular battles of Stallone and Snipes are the film’s saving grace, in part because, as mentioned before, the makers did such a good job of borrowing the Batman-Joker aesthetic.  Spartan, a grim white guy, is always seen garbed in dull blue or black hues, while Phoenix, a black guy constantly laughing at his own jokes, is clad in brilliant primary colors, including his spiky ‘fro hairdo, colored Dennis Rodman-blonde. The mere fact that Spartan sports the peculiar sobriquet “Demolition Man” should be enough to demonstrate that the screenwriters were trying to “do” superheroes without bringing in capes and cowls as such.

As noted above, none of the film's satirical barbs at modern-day repressive forces bite very deep, least of the ones found in a long rant by the leader of the rebellion, a guy who's is more or less the Che Guevara of the Indulgent Lifestyle.  To demonstrate the basic superficialty of the film's societal critique, I added one line to the rebel leader's rant: see if you can guess which one.

"I WANT high cholesterol. I wanna eat bacon and butter and BUCKETS of cheese, okay? I want to smoke a Cuban cigar the size of Cincinnati in the non-smoking section. I want to run through the streets naked with green Jell-o all over my body reading Playboy magazine. And I want to look at pictures of naked little girls! Why? Because I suddenly might feel the need to, okay, pal?"

Posted by Gene Phillips at 1:24 PM
Email ThisBlogThis!Share to TwitterShare to FacebookShare to Pinterest
Labels: combative adventures, the marvelous