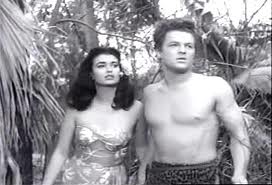 Following the relative upswing of the fourth and fifth Bomba films, numbers six and seven dip back down to an amiable inconsequentiality.  They excel only in terms of giving Bomba two gorgeous female leads-- Donna Martell and Laurette Luez-- in place of the "pretty" types that had dominated the series (Peggy Ann Garner, Sue England).  ELEPHANT STAMPEDGE also revives a support-character from the first film, Commissioner Andy Barnes, who would remain with the series, albeit played by Leonard Mudie in place of Charles Irwin.

As one might guess from the title, this time Bomba's out to save the elephants in ELEPHANT STAMPEDE, with ivory poachers as the predictable villains.  The one thing that sparks the conflict is the presence of Donna Martell's sarong-clad Lola, and a slight alteration of Bomba's attitude toward the ladies. In BOMBA ON PANTHER ISLAND the hero seems quite conscious of his effect on two young ladies, and he seems to enjoy the attention.  Here, he befriends Lola, who's been schooled in the white man's ways, but all he seems to want from her is for her to teach him the skill of reading white man's writing (though he never says what's made him so hot for books).  The hero studiously ignores all of Lola's overtures to make out, until Lola gets the idea of making him jealous by playing up to a visiting white hunter-- who, as it happens, turns out to be one of the ivory poachers.  Bomba does evince a moment of possible jealousy, which suggests that he's not as immune to Lola's charms as he pretends.  Once the action gets started, though, matters of love are forgotten, and the film once again ends with him fading into the jungle, no committments made.

On a minor negative note, though up to this point the Bomba series hasn't been egregious in its portrayal of black natives, STAMPEDE does start out with what some might deem an objectionable picture of black tribesmen treated as children by their own chief, as he insists that their own future depends on learning the white man's culture.

TREASURE has the simplest plot of any Bomba films so far. As in earlier features, we have nefarious nogoodniks-- diamond smugglers-- masquerading as legitimate hunters as they venture into Bomba's neck of the woods.  They enslave local workers to dig diamonds out of an extinct volcano, including the father of Lita (Luez).  Lita importunes "jungle devil" Bomba to free the workers and conquer the villains, and after assorted unmemorable thrills and spills, he does so.  There's no hint of romance between the hero and the female lead this time, and the only thing that struck me about the film was that after seven film adventures, visitors to Bomba's territory still doubt his existence until they see him in person.  I could be wrong, but it seems that by the time Tarzan had racked up seven sound-film adventures, pretty much everyone who visits Africa expects to encounter the "ape-man.".

Posted by Gene Phillips at 11:59 AM
Email ThisBlogThis!Share to TwitterShare to FacebookShare to Pinterest
Labels: combative adventures, outre outfits (u), superlative skills (u), the uncanny