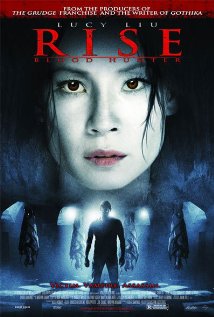 
Stylewise RISE: BLOOD HUNTER (written by Sebastian Gutierrez of SHE CREATURE and GOTHIKA "fame") resembles the hyper-realistic, moody, downbeat vampire dramas of the 1990s, such as 1994's NADJA.  Unfortunately, despite a talented cast-- Michael Chiklis, Carla Gugino and the "blood hunter" herself, Lucy Liu-- Gutierrez doesn't manage to do anything striking with this slightly more badass-themed vampire-adventure.

Sadie Blake (Liu) stumbles across a death-worshipping cult run by vampires, who have only minor similarities to the traditional Stoker kind: they're very strong and can heal most wounds, except those inflicted through the heart stake-fashion.  In addition, they feed (very messily) on the blood of people they hope will never be missed: the villain calls them "pedophilic wannabes and spoiled teenagers."  Sadie is captured and killed by head vampire Bishop and lady vampire Eve (Gugino), but Eve decides to resurrect Sadie because she fought so hard for life.  Other vampires then set Sadie up to gain vengeance on Bishop in order to eliminate their powerful enemy.

All of this sounds reasonably promising, but whether for reasons of taste or budget, Sadie's adventures generate little energy in the badass vampire-slaying department.  In addition, although Sadie moans a lot about being turned into a bloodsucker, her vampire angst carries no personal touches that raise it above the level of pedestrian kvetching.  Asian-American star Liu may have signed on to play Sadie because she's fairly down-to-earth compared to some of the Asian-flavored archetypes she's played in the past.  But Sadie simply doesn't compel the audience, and neither does her vampire-slaying companion, cop Clyde Rawlins (Chiklis).  Rawlins, like George C. Scott's character in Paul Schrader's HARDCORE, seeks to avenge himself for the loss of his daughter to the cult, and eventually becomes Sadie's reluctant backup.  Predictably enough, Sadie isn't the only pretty lady who gets brought back from the dead, but here too, Rawlins' confrontation with his undead daughter are another case of "been there, seen that."

The vampire fantasy is one that's almost tailor-made for deep psychological symbolizing, but Gutierrez's script merely follows the numbers all the way.  The "pedophilic wannabes" line above was about the only piece of writing I found memorable in this deadly-dull undead-offering.
Posted by Gene Phillips at 9:30 AM
Email ThisBlogThis!Share to TwitterShare to FacebookShare to Pinterest
Labels: combative adventures, the marvelous