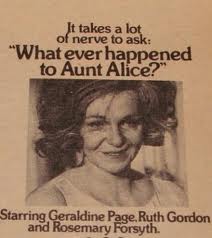 ALICE is one of three films produced in the 1960s by Robert Aldrich which all starred older female stars in roles suggestive of crime and/or horror.  In its advertising ALICE, the last of the three, made patent reference to the first with the tag-line: "Whatever happened to Aunt Alice was more terrifying than what happened to Baby Jane."  However, I deem neither of these to be metaphenomenal films simply because they deal with macabre or violent subject matter.  Both are essentially mundane crime films first, and ALICE, unlike WHATEVER HAPPENED TO BABY JANE, doesn't even contain the trope that most causes confusion: a "perilous psycho."  It's quite clear that the villainous Clair Marrable (Geraldine Page) kills for money, not for any reason flowing from a messed-up psyche.

The plot is essentially a cat-and-mouse game.  Clair, rendered destitute by her late husband's bad investments, gets the bright idea to hire elderly housekeepers, bilk them of their savings and then kill them, burying them in the garden behind her Arizona domicile.  However, after knocking off at least two such targets, a new housekeeper, known as Mrs. Dimmock (Ruth Gordon) arrives with an agenda.  She knew one of the victims and decided to take her missing friend's previous position in order to suss out possible misdeeds.  Dimmock's nephew, who knows her as "Aunt Alice," is aware of his aunt's imposture and continually tries to persuade her not to play amateur detective.  By the climax Clair finds out about Aunt Alice's agenda and the duel is on, ending up with fatal consequences for Aunt Alice.  At the close, Clair's crimes are found out, and in the film's only genius moment, she learns with terrible irony that she never needed to have killed anyone, because of an unexpected bequest from her late husband.

ALICE is all the way an actor's film: its strengths are in watching Page and Gordon interact with each other and the other principals.  I rate the film's mythicity as poor because it has no deeper symbolic resonance beyond being a cat-and-mouse tale.

As a sidenote, I will say that the second of the Aldrich-produced "old lady movies"-- HUSH HUSH SWEET CHARLOTTE-- does, to the best of my recollection, qualify as a bonafide horror film.  Possibly in a future post I'll have a chance to show why.
Posted by Gene Phillips at 3:44 PM
Email ThisBlogThis!Share to TwitterShare to FacebookShare to Pinterest
Labels: bizarre crimes and crimefighting (n), the naturalistic