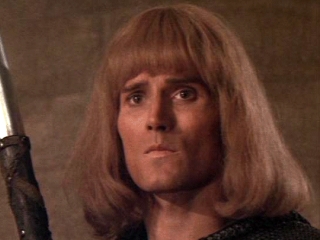 For my illo this time out, I looked for-- and found, without much trouble-- a picture of Miles O'Keeffe, star of SWORD OF THE VALIANT in which he looks as dopey as his movie.  I have no idea what emotion the actor was trying to convey, but he looks worried that his codpiece is chafing.

I'm usually fairly sympathetic to movies produced by the Golan-Globus incarnation of Cannon Films.  Usually they know that they're delivering huge truckloads of cheese, and they do so with great gusto in such films as the 1983 HERCULES.  But SWORD OF THE VALIANT sins in being both cheesy and boring.

IMDB informs me that SWORD's director Stephen Weeks had already made a film version of the medieval British tale "Gawain and the Green Knight," which I don't believe I've seen.  It surely must be better than this phlegmatic tale of "when knighthood was in the toilet."

O'Keeffe is one of SWORD's most glaring flaws.  He seemed reasonably comfortable playing dim barbarians or jungle-men, but a film in which he had to play the soulful knight Gawain was entirely beyond his capacity.  It's rumored that Weeks wanted the role to go to Mark Hamill, who might have managed a credible performance despite everything against him here.  Allegedly Golan and Globus insisted on the casting of O'Keeffe, which may be one of the greatest favors anyone ever did for Mark Hammill.  All of the other actors in this knight-movement-- Sean Connery, Peter Cushing, Trevor Howard-- put across tolerable perfs but none of them manage to kindle much fire for this episodic melange.

Despite (or because) of the four writers working with Weeks on the screenplay, the story's structure is abysmal.  As in the medieval story, a mysterious Green Knight visits Arthur's court just as the king has finished castigating his knights for their lack of bravery.  The Knight challenges all assembled to a game: he will allow one of them to attempt cutting off his head with the Green Knight's own axe, and if he survives, he will then be allowed a return blow.  Only young Gawain, not even a knight, volunteers to meet the challenge.  Just as in the story, Gawain beheads the visitor.  He then reveals his supernatural nature by picking up his head and replanting it.

In the original romance, the Green Knight's original bargain was that he would be allowed to take his return blow after "a year and a day."  The Weeks version jettisons this fairy-tale motif, so that the Knight changes his mind about beheading Gawain just because he's too young.  This Knight then gives Gawain a nonsensical riddle to solve, which may save him when next they meet.


Unlike real riddles, this one has no conceptual logic behind its contradictions.  Each phrase simply refers to the outcome of one of Gawain's forthcoming adventures as he roams about trying to search out the riddle's meaning.  The adventures-- some of which borrow minor elements from knight-tales--  are poorly choreographed and the accompanying music is abominably rinky-dink.  Weeks's script makes no attempt to forge any of his adventures into a meaningful whole, aside from having  a romantic interest appear in most of them.

The only time Weeks treats any element of his fantasy-world as having a symbolic value is at the end, when Gawain meets the Green Knight again, escapes beheading and slays the Knight, who implies that he is some sort of vegetable spirit, who rises only to be felled again.  But this "value" sounds cribbed from some grad student's paper on Frazer's GOLDEN BOUGH, and has no spirit of its own.  This feeble evocation of real mythic content is the only reason I assign this film a "metaphysical" function.
Posted by Gene Phillips at 3:35 PM
Email ThisBlogThis!Share to TwitterShare to FacebookShare to Pinterest
Labels: combative adventures, the marvelous