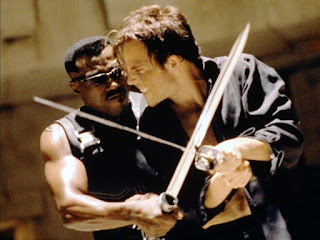 Wikipedia credits BLADE with having initiated Marvel's success in live-action films. I wouldn't give it that much credit for two principal reasons: (1) few of the viewers who made the film a success (spawning two feature-film sequels) knew that Blade was a (very minor) Marvel character, and (2) nothing about the film reflected the mindset of Marvel Comics as it would come to be defined following the important live-action adaptations of the early 2000s: X-MEN (2000) and SPIDER-MAN (2002). I'll note in passing that if these two adaptations of Marvel's "big guns" had bombed, such failures could well have jinxed the later MCU films. Had BLADE failed, I don't imagine that said failure would've had any more long-term repercussions than the actual flop of 1999's under-rated MYSTERY MEN.

The original comics-character debuted as a supporting character in Marvel's TOMB OF DRACULA series, and only enjoyed a handful of starring appearances. Sole scriptwriter David S. Goyer, though later responsible for a number of bad superhero films like MAN OF STEEL, succeeded here in fusing the fragments of Blade's history into a cohesive whole, and, in some cases, improving upon them. For instance, one of the many plot-threads of the movie-- which, to my knowledge, was not in the comics-- is that in Blade's world, there's a conflict between the elder vampires, who keep the existence of their kind concealed from humanity, and a younger, ambitious breed. Thus the movie starts with a gratuitous display of vamp-on-human violence that foreshadows this conflict, even if the scene's main purpose is to gross out the audience and to introduce Blade as the champion of put-upon humanity.

The opening violence also leads Blade to one of his primary support-characters, Doctor Karen Jenson. One of the hero's vampire opponents is severely burned but not killed, and when he's taken to the local ER, the bloodsucker kills one doctor and bites Karen. Blade initially succors Karen to use her as bait to lure more vampires, but over time her skills as a hematologist become increasingly important to the story, not least in terms of humanizing the protagonist, who's become almost as fearsome and implacable as the monsters he stalks.

One of the younger breed is Deacon Frost (Stephen Dorff), who is indirectly responsible for imbuing Blade with quasi-vampiric powers (resistance to vampire bites, slow aging, strength). Frost bit Blade's mother when she was still pregnant with him, and though she apparently died, the infant Blade survived to develop into a "day-walker." Blade and his mentor have been looking for Frost for years, and their alliance with Karen just happens to parallel the young vampire's newest project: to perform a special ritual that will give him rulership over the vampire kingdom.

The action-scenes in BLADE are sometimes too fast-paced to follow, creating confusion more than excitement. Snipes' powerhouse performance as the hero sells the film even when Stephen Norrington's direction falls short or turns lackluster. Unlike the superhero films of the 2000s, BLADE's combination of horror and adventure doesn't leave much room for comedy relief, though there is a cute repeated bit about a recurring vampire henchmen (Donal Logue) who keeps losing his hand to Blade's formidable sword.

The one aspect of the film that justifies my SPOILERS is that I'll now reveal that, in contrast to the original history of the character, Blade's mother, instead of bleeding to death, rises again as one of Frost's undead. She both fights with Blade and attempts to seduce him to Frost's cause, which could have had the effect of making the villain into a father-surrogate figure, a Claudius to the hero's Hamlet. However, precisely because this version of Frost has been retooled as "the young upstart," and because he's being played by an actor about ten years younger than Wesley Snipes, the standard Oedipal arrangement doesn't work here.

Posted by Gene Phillips at 2:51 PM
Email ThisBlogThis!Share to TwitterShare to FacebookShare to Pinterest
Labels: combative adventures, the marvelous