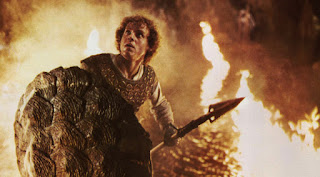 Aside from 1978's CORVETTE SUMMER, DRAGONSLAYER is the only film that Matthew Robbins both directed and co-wrote (collaborating on both films with one Hal Barwood).

It's interesting that, even though the genre of fantasy was booming in 1981 thanks to numerous Tolkien emulations and to D&D games, DRAGONSLAYER operates as a elegy for the worlds of fantasy. Though the specific location of the narrative is the made-up "Urland," it's just Dark-Ages England by any other name. At this time, Christianity is making major inroads into the culture but the old ways of paganism have not yet died. However, even Ulrich, the foremost wizard in Urland, tells his apprentice Galen that he Ulrich is not long for this world, at a time when wizards are becoming scarce.

In an opening cadged from THE MAGNIFICENT SEVEN, a coterie of poor farmers, led by the apparently male youth Valerian, approach Ulrich for help in banishing a dragon. As seen in the archetypal European dragon-myth, this particular dragon, Vermithrax, has taken up residence in some caverns near their farmland, and over time the rulers of the realm have appeased the dragon by feeding it female virgins. Said virgins are selected each year by a lottery that supposedly selects from all females of a certain age, though it seems that only the poor people's daughters have ended up as dragon fodder over the years. Ulrich swears to help the farmers, but he meets what appears to be a death by mischance. Galen (Peter MacNicol) chooses to accompany the farmers back to their territory, and in the process learns that Valerian is actually a young woman disguised as a boy, as part of her father's strategy to keep her out of the dragon's mouth.

Galen does have considerable magic powers, and he brashly attempts to slay the dragon by simply burying it in its own cavern. However, Vermithrax breaks free and scours the countryside with fire. This puts Galen in bad odor with reigning king Casiodorus, who is largely responsible for the custom of dragon appeasement. He and his soldiers confiscate Galen's magical amulet, and although the young wizard escapes, he's unable to do anything more to fight the dragon. In fact, he comes into further conflict with the King when Galen reveals to Casiodorus' daughter Elspeth that she's never been included in the lottery.

Galen, armed with new weapons given magical potency, attempts to slay the dragon himself, but fails, though he does manage to kill the king's foremost flunky. However, at the eleventh hour it turns out that the deceased Ulrich is not quite sincerely dead, and that he's laid a secret plan to kill the dragon all along.

Robbins and Barwood's medieval world lacks many of the glorious tropes of heroic adventure. Casiodorus is not just an aristocratic parasite, but a fool, since he vainly hopes that the dragon will simply die someday. Galen sees this dream proved a folly when he invades the cavern and finds that Vermithrax has spawned a small brood of carnivorous dragonets-- which would eventually prey on the people as well, save that Galen kills them. The Christian priests are no better, being presented as vain in their trumped-up belief that God will save them from the ravening beast. Even Valerian's father, though approving of her alliance to Galen, admits that he'll be glad to see magic die away. Ulrich's plan, in effect, destroys both the last dragon and the last wizard, clearing the path for the triumph of materialism and general mediocrity. However, the last minutes of the movie allow Galen and Valerian to cherish the hope that at least a little magic will survive.

Posted by Gene Phillips at 3:32 PM
Email ThisBlogThis!Share to TwitterShare to FacebookShare to Pinterest
Labels: combative adventures, the marvelous