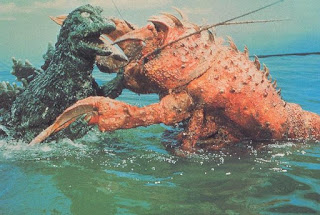 
I'm a little more forgiving these days of SEA MONSTER's shortcomings than I was in earlier viewings, but even so, the thing I like best about the film is that it took a script that would've made a terrible "King Kong II" film and converted it into a mediocre Godzilla flick. By my lights this was a fortunate state of affairs, because when Toho Productions did make its second and last "King Kong II" film, they did a better-than-average job with the delirious KING KONG ESCAPES. Thus I'd have to say that SEA MONSTER's virtue is that of the soldier who throws himself on a grenade to protect the lives of other soldiers.

Godzilla, after all, had already had a number of epic films in his repertoire, with SEA MONSTER being immediately preceded by the two monster-mashes that pitted the Earth-monsters against King Ghidorah. Since Toho was reputedly cutting costs on its monster epics anyway. Godzilla's best days (at least in the Showa era) were all but behind him, apart from DESTROY ALL MONSTERS, and even this was originally intended as a farewell project.

The most obvious sign of the penny-pinching times is that most of SEA MONSTER emphasizes a coterie of human beings who get stuck on Letchi, a South Seas island that's a neighbor to Mothra's Infant Island. A motley crew of Japanese youths are dragooned by one of their number into a search-and-rescue for the one guy's brother, and although the brother-location poops out dramatically, it does make for an interesting opening. Once the guys arrive on Letchi, they eventually find the brother, but they also come across a lot of trouble. One source of trouble is a maybe-Communist terrorist organization, the Red Bamboo, who have set up shop on the island to manufacture nuclear bombs. They've also drafted several Infant Isle natives to slave for them, though one comely lass named Daiyo escapes and involves the guys in her difficulties. On top of this, there's also a giant lobster, Ebirah, who just hangs around the boundaries of Letchi and keeps anyone from leaving. It's not clear if Ebirah was created by nuclear run-off, or if it was one of the many subterrranean prehistoric behemoths who found its way to the surface as Godzilla did. Alternately, the big crustacean may be a little of both, like Godzilla. Somehow the Red Bamboo have evolved a way to fool the lobster's senses with a special chemical, which might argue for their direct involvement in its creation.

However, the young girls and girl have one small, if ambivalent, advantage: they find Godzilla hibernating in one of the caverns on Letchi. (Originally this would have been Kong, though presumably that script would've had to find some half-decent reason for Kong to have allowed the terrorists free reign on his island.) With some help from a lightning-rod-- IMO the movie's best scene-- the heroes manage to jolt Godzilla awake, and the rowdy reptile immediately takes on the big lobster. Ebirah retreats, so Godzilla returns to the island-- which means that he becomes yet another problem for the good guys.

The rest of the film involves the heroes running from either Godzilla or the soldiers while waiting for Mothra to wake up and come to their rescue. Despite some lively moments, the remainder of the film becomes wholly predictable, aside from a modesty entertaining final battle between reptile and crustacean.

Posted by Gene Phillips at 3:20 PM
Email ThisBlogThis!Share to TwitterShare to FacebookShare to Pinterest
Labels: combative dramas, the marvelous