THE SHADOW RETURNS, BEHIND THE MASK, THE MISSING LADY (1946) 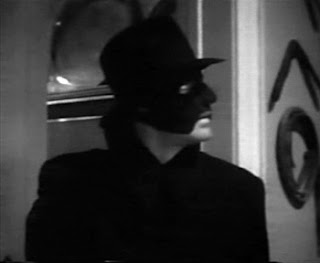 
Of all the masked avengers to spring from the pulps, the Shadow would seem to be the least promising to be reworked into comedic terms. However, these three Monogram B-films are at least much livelier than the two dull B's produced by Grand National in the late 1930s.

The films are almost certainly modeled on the light-hearted adventures of Nick and Nora Charles, with Lamont Cranston as a young man-about-town (and nephew of the police commissioner!) as Nick and his fiancee Margo Lane as Nora. To be sure, whereas the THIN MAN flicks mastered a sort of effortless joie de vivre, the writers of these ersatz SHADOW films force in so much allegedly clever dialogue that the viewer is practically drowning in bon mots. To make things more complicated, the crimefighter's faithful taxi-driver Shrevvy has his own girlfriend Jenny who follows him around-- and both girls are perpetually suspicious that their guys are using crimefighting as an excuse to gad about.

The devoted Shadow-phile will never hear a word spoken as to why bon vivant Cranston has assumed the masked identity of the Shadow. Despite the fact that the radio serial had become successful by 1946, there's no indication that this avenger has to "power to cloud men's minds," though he does seem to be able to project his shadow into unlikely lighted spaces. Otherwise, he's just a guy wielding guns and wearing a mask and dark topcoat. To be sure, the various directors of these flicks must've wanted to give Shadow-fans a little action, for Cranston, as played by serial star Kane Richmond, does get into a few fights, rather than just threatening people with his dark presence.

In all three films, Cranston and his entourage seek to solve some mystery, usually involving some "macguffin" or other. In SHADOW RETURNS, there's a formula for a radical new plastic at stake, though this object gets far less attention than Margo's latest jealousy over her beau, or her pique when she can't get him across the altar. Phil Rosen directed with uncredited assistance from William Beaudine. 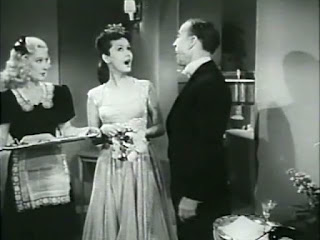 BEHIND THE MASK is, if anything, even sillier. A villain poses as the Shadow and forces the hero to clear his name, but this takes a back seat to such scenes as Margo posing as the Shadow, even though she's wearing Cranston's outfit and said outfit does not even slightly fit. Again Beaudine worked on the film, though the director of record is Phil Karlson. 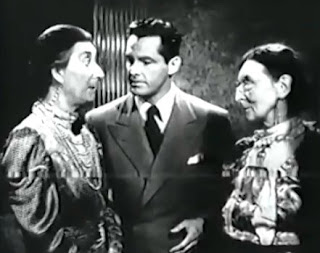 In one respect THE MISSING LADY is the most interesting of the trio, and not because of the "lady" of the title, a MacGuffin in the form of a jade statue. In MASK Karlson sedulously followed the daffy comedic model provided by the first film, and the script for LADY does include some goofy stuff, like a pair of old biddies who like to race with their apartment building's elevators. But there are some gloomy, seedy crime-scenes-- particularly at the opening-- that look forward to Karlson's serious crime-films of the early fifties, such as 99 RIVER STREET and THE PHENIX CITY STORY. Sad to say, Karlson's last films included a return to daffiness in the form of the "Matt Helm" film series.

Posted by Gene Phillips at 3:47 PM
Email ThisBlogThis!Share to TwitterShare to FacebookShare to Pinterest
Labels: combative comedies, outre outfits (u), the uncanny