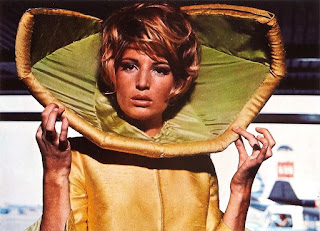 
Here's a mini-review I recently wrote on the Classic Horror board:

As I type this, I've almost finished watching MB on Youtube. I can appreciate Losey's use of vivid, primary colors and weird angles, but he's taken the story O'Donnell did and flummoxed it around for the sake of "artiness." Reportedly in the day he claimed he was going to "out-Bond Bond," but had never seen a whole Bond film, and so only had his own skewed perception of what the genre was about. OUR MAN FLINT is a much more successful spoofy spy-flick-- heck, even the obscure OUT OF SIGHT understands how to play on the tropes better. Why Losey thought his Antonioni borrowings would play in Peoria is beyond me.
I've seen a lot of criticism of Vitti, but I think she was just doing what she was told to do, to be airy-fairy and silly, and she did that well. It just didn't help sell the movie.

Of course I have a few more things to say about this famous misfire. The MODESTY BLAISE comic strip, written by Peter O'Donnell, debuted in 1963, and its success with the public coincided with the "Bond fever" unleashed by the 1962 movie DOCTOR NO. Technically the sophisticated Modesty Blaise and her partner Willie Garvin weren't any sort of espionage agents. But because they were reformed master criminals, they had a working knowledge of the subcultures of crime and espionage, and most of their exploits were only different from those of Bond in that they were independent agents who answered only to their own sense of justice. At some point, the franchise was optioned for film adaptation, and O'Donnell provided a screenplay, based partly on the first outing of Modesty and Willie. Though O'Donnell's screenplay was only marginally influential on the finished film, the author novelized his story in the first prose novel, MODESTY BLAISE. Though I haven't read the novel in many years, I recall it as a tautly-written adventure-story informed by humor and strong sentiment. The novel has no metaphenomenal elements, though other stories in both the comic strip and the prose adaptations employed such elements on occasion. The 1966 film does have a few uncanny devices-- gas-bombs and something called "antisonar"-- which place the solo film into the realm of the uncanny.

Director Joseph Losey, best known at the time for his 1963 arthouse success THE SERVANT, reportedly found O'Donnell's script boring, though he kept just the bare bones of the original story, in which Modesty (Monica Vitti) and Willie (Terence Stamp) take on master criminal Gabriel (Dirk Bogarde) and his small army of henchmen. Whereas O'Donnell provided a crisp adventure-tale involving stolen diamonds, this setup was for Losey merely an excuse for endless shots of Vitti fluttering around various exotic locales in bizarre costumes. 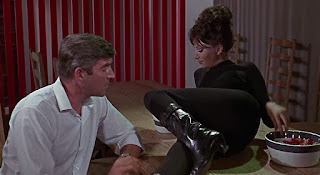 Twice blonde-haired Vitti is made up to look like the comic-strip character, complete with brunette hair and quasi-military outfit.  But at no time does Losey give either of the two heroes any resemblance to their tough-as-nails predecessors. Willie does a little bit of his signature knife-fighting, and Modesty does a little clumsy judo, but Losey seems utterly uninterested in giving the audience anything approximating thrills. Had he spent even a tenth of his costume budget on stuntwork, maybe MODESTY would've been improved slightly. As it stands, the only scene that offers some suspense is one in which Gabriel's perverse right-hand henchwoman beats up a mime and throws off a cliff. In the original story, the mime is an undercover man, but the script by Evan Jones (who had worked with Losey on three previous projects) doesn't even provide that rationale. I suspect that Losey only kept this scene true to the original because it tickled his love for surrealistic imagery.

While Losey shows no interest in the travails of Modesty and Willie, the villain Gabriel comes close to being the real star of the show, as Losey apparently instructed Bogarde to play the character as a flaming, effete homosexual. Thus the film is replete with countless scenes of Gabriel lounging around and making ironic pronouncements-- though none of his supposedly humorous asides are funny.

Speaking of irony, Losey certainly intended to undercut the straightforward adventure of the original narrative and replace it with something like "camp," although Losey apparently did not understand that true camp only mocks its narrative very indirectly. One can't call MODESTY "satire" either, since there's no target for any animus. So by default MODESTY becomes a free-form irony, mocking the supposed pretensions of adventure-fiction with yet greater pretensions.

The movie's sole virtue is its use of vibrant primary colors. But in many respects, even though it's an irony like the 1968 BARBARELLA, the later film took the opposite course: piecing together various sequences from the picarescque French comic feature and making them into a relatively tight whole.

Posted by Gene Phillips at 3:44 PM
Email ThisBlogThis!Share to TwitterShare to FacebookShare to Pinterest
Labels: combative ironies, diabolical devices (u), the uncanny