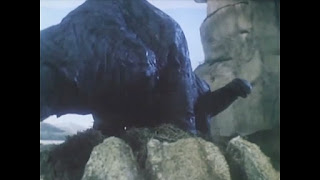 
Though the 1937 KING SOLOMON'S MINES remains the most faithful adaptation of any work by H. Rider Haggard, KING SOLOMON'S TREASURE may be the runner-up.

To be sure, there's not a lot of competition. Since the silent era, only three Haggard works-- SHE, KING SOLOMON'S MINES and MINES's sequel ALLEN QUATERMAIN-- have seen adaptation, and it's a sad state of affairs that for modern movie-watchers the best-know version of Haggard's long-running white-hunter hero comes from two terrible 1980s movies, the 1985 SOLOMON'S and its immediate sequel, ALLEN QUATERMAIN AND THE LOST CITY OF GOLD. The second of these adapted a few elements from the novel ALLEN QUATERMAIN, but it was primarily, like the earlier film, a clear knockoff of RAIDERS OF THE LOST ARK.

TREASURE, completed two years before the debut of Indiana Jones, is probably the closest adaptation ALLEN QUATERMAIN-- which actually gets explicit mention in the credits-- will ever receive. Though Haggard's initial Quatermain book is the better work, ALLEN is arguably more influential. In the later book Haggard promulgates the trope of the "lost race," a civilization that has somehow become separated from the rest of the world and that keeps all the customs of some archaic culture. Many authors, not least Edgar Rice Burroughs, mined this trope repeatedly throughout 20th-century pop fiction. To a small extent, ALLEN also contributed to the trope of "surviving prehistoric life," in that its heroes are forced to battle unusually large crabs. To be sure, Jules Verne's yet earlier JOURNEY TO THE CENTER OF THE EARTH was probably the main influence on the signature work of prehistoric survival, Conan Doyle's 1912 THE LOST WORLD.

TREASURE doesn't entirely hew to the 1887 Haggard novel: in addition to oversized crabs, the heroes of the story also come across a couple of dinosaurs before reaching a lost colony of Phoenicians, conveniently next to a smoldering volcano. The film uses the same characters from the two Haggard books-- great hunter Quatermain (John Colicos), Sir Henry Curtis (David McCallum), and Captain Good (Patrick MacNee)-- as well as including Umslopogas (Ken Gampu), the Black African tribesman who joins Quatermain in the second novel. However, instead of alluding to the previous African journey of the three Englishmen, they go looking for King Solomon's Mines and end up encountering Zu-Vendis, the kingdom of the Phoenicians. Presumably the producers wanted the title to remind moviegoers of the first book, which is far better known today than the second one. The three Englishmen and their African buddy are welcomed by the city's queen Nyleptha (Britt Ekland), who in the book is one of two sisters. (Oddly, the 1987 QUATERMAIN film gets this detail right, but not much else.)

Nyleptha has good reason to welcome strangers, for her court is controlled by an evil high priest, who wants her to marry her half-brother in order to secure the throne for the future. The Phoenician queen promptly falls in love with Curtis, and he with her, which of course leads to lots of trouble for the Englishmen and their buddy-- not to mention the fact that the volcano chooses to get active right around the same time. The Englishmen take out a lot of soldiers with their rifles, with Quatermain showing himself the best shot, as in the novels. In contrast to the ending of ALLEN QUATERMAIN the novel, though, where both Allen and Umslopogas perish, Allen is left alive for possible sequels.

Now, having chronicled all of the film's likenesses and differences from the novel, I come to the big question: does being faithful to the book make TREASURE a good film? And the answer is that it's at best watchable. I've seen online reviews trashing the performances of Colicos, McCallum, and MacNee, but I thought all three of them did a fair job of keeping things moderately interesting. (Can't say the same for Britt Ekland, though.) The main problem is that both the script and the direction are simply pedestrian, giving the actors little to work with. I only assign the film with a "fair" mythicity because it does try, however erratically, to bring life to the original "lost race" novel


Posted by Gene Phillips at 1:44 PM
Email ThisBlogThis!Share to TwitterShare to FacebookShare to Pinterest
Labels: combative adventures, the marvelous