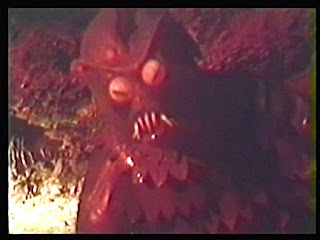 
Of the eight direct-to-TV films Larry Buchanan made in the late sixties, IT'S ALIVE is the only one not based on an earlier AIP movie. I think that I may have seen this film aired on TV at the time of its premiere, or if not, at some time close to it. At  the time I thought it one of the worst films I'd ever seen.

I'm a little more forgiving now, though it's still obvious that Buchanan made ALIVE with the same workmanlike approach seen in the AIP adaptations. It's been said that ALIVE is based on a Richard Matheson story, but Matheson is not credited, and it seems likely that Buchanan simply took the base idea of the story and reworked it to suit his location shooting and the talents of his actors-- of whom only former Mouseketeer Tommy Kirk was the only "name."

A tourist couple, Norman and Leilia, go driving in the Ozarks, but their car runs low on gas. They pick up a young hitch-hiking paleontologist  named Wayne (Kirk), who has come to the area to examine prehistoric remains.  Wayne suggests that they seek out a small farm run by an eccentric middle-aged, Greely, and his housekeeper Bella. Greely has no gas to offer the travelers, but he has a makeshift zoo for tourists, and insists that the trio get a look at the remarkable creature he has confined down in a subterranean cave.

Leilia is the only one who senses that Greely isn't quite right, and she's proven correct when the loony fellow traps all three of them in a cage beneath the earth, and boasts that he plans to feed them to his creature. Paleontologist Wayne figures out that the carnivorous, reptilian humanoid is a survival from prehistoric times, called a "megasaur" or something like that. Eventually Greely explains that he came across the creature and began feeding it with various large animals. Since the madman has no plans beyond keeping his pet creature fed, one supposes that he could have continued using animals indefinitely, but then there would've been no conflict. So at some point he found it convenient to ambush lost travelers like his latest three visitors and give them to the creature. However, he fancies Leilia and offers to save her from the megasaur, even noting that he'd cheerfully get rid of his housekeeper and let Leilia take her place.

Bella, though terrified of Greely's violence, becomes the trio's only ally, though she isn't able to keep Norman from being killed. None of the travelers are interesting-- Wayne, for existence, exists just to give the audience insight on the dinosaur-man's supposed provenance. Only Bella sustains some sympathy, especially given that Buchanan, largely seeking to eat up time, devotes a substantial sequence to showing how Bella fell into Greely's clutches and was terrorized into becoming his virtual slave.

As Greely, actor Bill Thuman is alternately good and bad-- bad when he attempts to "play mad," good when he simply confines himself to a quiet menace. Both he and his mesozoic minion come to a bad end-- bad also in the sense of being tedious and anti-climactic. Allegedly, Thurman also played the monster, who is your basic "zipper-up-the-back" critter, complete with absurd ping-pong ball eyes.

Posted by Gene Phillips at 3:16 PM
Email ThisBlogThis!Share to TwitterShare to FacebookShare to Pinterest
Labels: the marvelous