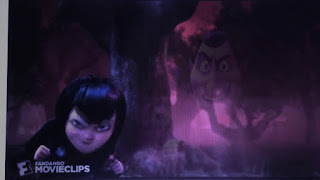 
It's not saying much to assert that the sequel to HOTEL TRANSYLVANIA is an improvement on the first film, given how tiresome and pathetic it was. It's of passing interest to me, though, that it improved precisely because most of the story ditches the original "hotel for monsters" schtick, and lets the comical creatures cavort in other settings.

It's seven years since the first film, thus giving new married couple Mavis and Johnny time to give birth to a five-year-old rugrat, Dennis. New granddad Dracula (Adam Sandler again), having started out his comic career interfering with his daughter's life, returns to his old ways, for Dennis seems to be late to manifest any vampiric powers from Drac's side of the family. This problem provides the initial excuse for the vampire-lord and his goofy band of ghouls to take leave of the hotel's confines. Drac fools Mavis and Johnny into taking a trip without Dennis so that Drac can expose Dennis to a "monster training camp," the very one from which the Big D matriculated. This outing leads to a handful of moderately amusing gags, both about the monsters' "road trip" and the camp itself, which is now replete with multiple child-safety measures. Further, Dracula is aghast to discover that his maybe-human grandson has a different sort of "bat man" for his favorite hero, as in the one published by DC Comics.

Though Drac does return to the hotel afterward, very little of the plot-developments center around the running of the hotel itself. Drac's gross father Vlad returns from limbo and starts bossing his son around, and Drac tries to keep Vlad from finding out that his granddaughter has married a human. Further, for the first time some nasty-minded monsters appear: a legion of grotty bat-creatures, who menace Dennis but ironically bring his vampire powers to the fore. In a climactic battle-scene reminiscent of the 1966 BATMAN show, Drac, Mavis and Dennis beat the crap out of the bad bats, paving the way for overall reconciliation and all that jazz. 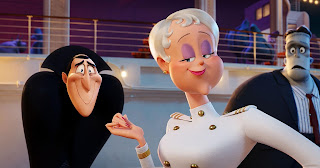 Not surprisingly, the third installment returns to the worn-out schtick of the first tilm, but instead of confining the action to Hotel Transylvania, this time most of the story is tied to a cruise-ship, the Legacy, and various other seaward sites.

First, there's a prologue showing how Dracula constantly eluded the murderous attacks of nutty vampire-hunter Abraham Van Helsing, who just doesn't like vampires because the prof's a dopey bigot. (Naturally, this film doesn't include anything like the first film's spotty references to the way Drac's breed go around hunting for humans). Following the prologue, Dracula begins thinking about taking a wife to replace his dead amour, but his daughter convinces him to get away from hotel business and take a cruise. On board the Legacy, Drac is immediately smitten by the ship's captain/entertainment director. Ericka.

But Ericka has a hidden agenda: she's the great-granddaughter of Van Helsing, now a cyborg with a human head, and he's drafted Ericka in a plan to destroy all of the monsters on the cruise. Not surprisingly, Ericka's initial emnity toward the vampire lord takes a turn for the better-- which is more than the film's predictable litany of dumb gags does.

The best thing about the third film is that, in spite of the presence of a menacing monster-hunter, the film doesn't attempt a combative conclusion like that of the second opus. I'm obliged to label the second film as combative, but the first and third are not, making it possible for me to dismiss the series, at least for now. Since HT3 was another box-office success, presumably another of these things will be glutting movie screens in the near future.

Posted by Gene Phillips at 2:18 PM
Email ThisBlogThis!Share to TwitterShare to FacebookShare to Pinterest
Labels: combative comedies, the marvelous