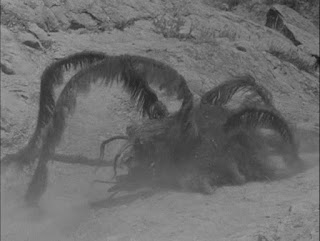 Thanks to Youtube I finally managed to re-screen the only two JUNGLE JIM films I had not reviewed yet.

FURY OF THE CONGO is one of the liveliest, albeit most nonsensical, entries in the series. Jim (Johnny Weismuller) starts out rescuing a man named Cameron from a crashed plane. Cameron's on a hunt for Dunham, a lost biochem professor. Actually, the professor's mission sounds more like a naturalist's specialty, since Dunham went into the Congo looking for a strange hybrid beast, the Okongo, which is a cross between an antelope and a zebra. (Naturally, the film uses horses with fake stripes.)

Jim guides Cameron into the wilds of the Congo. A scene-shift informs the viewer that Dunham has been captured by evil white hunters. The hunters have also captured a bunch of Okongos, because the beasts have a special narcotic juice in their glands, as the result of eating and converting native narcotic plants. The crooks force Dunham to harvest the drug, as well as drafting many of the local native men to help with the Okongos-- though the viewer doesn't really see the native men doing much of anything to justify the trouble they later cause for the villains.

The absence of the men from the local tribe does make for some Amazonian activity, when Jim and Cameron are netted by the women of the tribe, led by the sprightly Leta (Sherry Moreland). Despite the women's spears, Jim wins them over with his jungle charm, and then he, Cameron, and Leta are off to set both the native men and the Okongos free. On the way Jim has to kill a very large spider-- possibly the phoniest in cinematic history, given the way it's transparently dragged across the ground via wires. Jim eventually learns that Cameron is actually the villains' leader, which begs the question as to what he was doing in the plane earlier. Despite all these reversals, Jim succeeds in his mission, leading to the film's best action, where the white hunters are killed by the spears and arrows of the native women. In contrast, SAVAGE MUTINY is an entirely naturalistic adventure in the Jungle Jim canon, as well as a strange apologia for nuclear bomb-testing. Even before Jim is called upon by his country to aid a British/American nuclear-testing project, the white hunter keeps busy by ferreting out some Communist spies in the Congo.

Afterward, the scientists tell Jim that they want to test their bomb on a particular island off the coast of Africa. It's really important to test the bomb on this isle, since the scientists want to get valuable data on the effects of radiation on the plant life there. However, the island is inhabited, so the scientists need Jim to persuade the natives to be relocated.

Jim has no problem with this duty, and he even challenges one of the headmen of the tribe to a fight to get the natives' respect. However, more Communist agents are still loitering about, and they get the idea to score a propaganda victory over the West. The Commies attempt to sabotage the evacuation so that either the test will be prevented or the tribe will be bombed into extinction. Jim manages to prevent both fates. The final words of the film are the one saving grace of the otherwise tedious tale, since the writers managed to make it seem like the West's freedom to test bombs on primitive isles marked the very apogee of the cause of freedom.

Posted by Gene Phillips at 3:16 PM
Email ThisBlogThis!Share to TwitterShare to FacebookShare to Pinterest
Labels: exotic lands and customs (n), the marvelous, the naturalistic