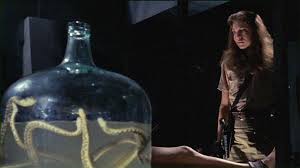 
Though BIG DOLL  HOUSE was not the first WIP film, it was arguably the one that defined the genre for the 1970s and subsequent decades. And one thing that makes it stand apart from the rest is that, although it's in no way a metaphenomenal narrative, it does use tropes that, given a different approach, could have been aligned with the uncanny.

HOUSE sets up its action with many of the usual patterns seen in WIP films from earlier decades: the new fish (Judy Brown) enters prison to do time for an offense that the audience doesn't think is so bad (in this case, killing a scummy husband). She meets a set of predictable yet still vivid character-types: the tough girl (Roberta Collins), the revolutionary idealist (Pat Woodell), the lesbian and her heroine-addled partner (Pam Grier and Brooke Mills). There's a sympathetic prison doctor, who's pretty much the only decent male, a couple of comical delivery guys (one of whom is played by Sid Haig), and a bunch of cruel guards, all women. But for once there's a little mystery: though a woman named "Miss Dietrich" is nominally in charge, there's also a mystery man, Captain Mendoza, who is supposedly the real warden, though the prisoners never see him. The audience gets to see Mendoza as a weird masked figure who presides over the frequent tortures of prisoners: whippings, electroshock, and torment with snakes (the last two providing naturalistic versions of "bizarre crimes," even as Mendoza's outfit is a naturalistic "outre outfit.")

Since all of the women are impossibly glammed-up, it's hard to take even the violence very seriously, and a constant stream of one-liners reinforces the lighter mood, with the stand-out being the oft-quoted "You'll get it up or I'll cut it off!" There are some mild subtexts of feminine liberation here, roughly linked to the then-popular vogue for proletariat revolution, though these too don't bear strong examination.

There's more implied than actual sex, and catfights are featured far more than gunfights, including a classic battle between Collins and Grier (the last time Pam Grier would ever lose a filmic fight). The revelation of the mysterious warden's identity is pretty obvious, though the script adds a twist by showing that the corrupt official has a psychological hangup against the sexual proclivities of the female convicts. Though I used to think that the next-year follow-up THE BIG BIRD CAGE was the better of the two productions, I've come to feel that the latter is a little too jokey, and thus misfires when it comes to providing good sleazy melodrama.
Posted by Gene Phillips at 1:00 PM
Email ThisBlogThis!Share to TwitterShare to FacebookShare to Pinterest
Labels: bizarre crimes (n), outre outfits (n), the naturalistic