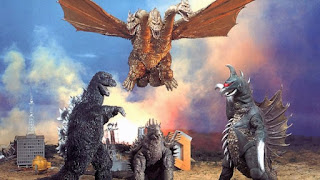 
The American name for GODZILLA VS. GIGAN doesn't make much sense, since the audience only sees Monster Island briefly, before heroic monsters Godzilla and Anguirus depart said isle in order to fight the bad monsters. However, the Japanese title is also problematic, since Gigan, despite being touted as a major adversary alongside fan-fave Ghidrah, ended up being one of the Big G's least well-remembered opponents. And at least the title MONSTER ISLAND does suggest the idea of the film's only attraction, a big monster-battle-- and since those battles take place on the Japanese mainland, well, that's a "monster island" of a sort, too.

ISLAND is one of the lowest points of the Showa series, not least because it recycles footage and music from earlier Toho efforts, including bits of the highly recognizable Anguirus-Ghidrah tussle in DESTROY ALL MONSTERS. But at least there are some new, well-staged battles between Ghidrah and Godzilla. In contrast, new heavy Gigan-- apparently some sort of space cyborg, since he has a cycling buzzsaw that sprouts out of his stomach-- wears out his welcome once he's shown off his limited bag of tricks. (He also has arms that terminate in single curved talons, apparently made of metal.) As in earlier films, Godzilla and Anguirus function more or less like superheroes who come running when humans are in danger, though at least this time the villains behind the monsters are planning to destroy the whole Earth to make it habitable for them.

Once again Toho resorts to aliens as the prime movers behind a monstrous assault, but these extraterrestrials are perhaps the least interesting instigators of the period. The script's big idea is that, instead of the aliens being simply a hard-luck race looking for a new world to colonize, these beings are sort of a sub-race that survived when the dominant race of their world exhausted all resources. ISLAND is exceptionally preachy about humans having a lot in common with the dead aliens, and pedestrian as well, since the script thinks it's brilliant to pick up on the old canard that only cockroaches will survive once humans wipe themselves out. Thus these creatures are, despite their alien origins, are literally big cockroaches who can disguise themselves as humans. This time, though, the Cockroach People decide not to wait for humankind to destroy itself, but nudge things along.

The only interesting sociological myth of ISLAND is that the script reflects how thoroughly the Showa producers deemed the Godzilla series to be "for kids." The principal viewpoint character is a goofy manga artist named Gengo, and the level of his talent is shown when he imagines a couple of condescending faux-monsters who incarnate "homework" and "strict mothers." His questionable talents cause him to come in contact with the organizers behind a theme park, World Children's Land, which is also devoted to monsters (though all we see is one big Godzilla-statue). The organizers, however, are the Cockroach Men, and so Gengo and his allies-- one of whom is a young woman looking for her alien-abducted brother-- get involved in exposing the plot of the Cockroaches. The only member of Team Gengo who's at all interesting is his girlfriend Tomoko, who shows off her black-belt karate skills in a couple of scenes.
Posted by Gene Phillips at 2:24 PM
Email ThisBlogThis!Share to TwitterShare to FacebookShare to Pinterest
Labels: combative dramas, the marvelous