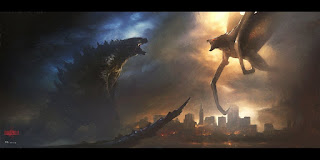 
In my review of SHIN GODZILLA I observed that it was the first Japanese-made Godzilla film since the original to focus entirely on a battle between the giant monster and the Japanese military. Of course, America's 1998 version followed that trope, but given the derivative nature of that movie, I tended to think its lack of other big monsters was largely reflective of the script's lack of imagination.

The 2014 effort has much in common with the "monster-vs.-military" trope, but it does labor mightily to orchestrate a climactic battle between this spanking-new incarnation of Godzilla and a couple of insect-monsters called "Mutos." In contrast to the 1998 film, 2014-Godzilla mines a trope seen in the first few Showa films, which asserts that creatures like Rodan, Anguirus and the Big G have migrated from caverns far beneath the Earth's surface. And although there are some fulminations against nuclear power in G-2014, this seems to be the first time a Godzilla-film suggested that these archaic monsters were mutated in archaic times, when the Earth was filled with naturally occurring radioactivity. This explanation does make it a little more logical that Godzilla and the Mutos should be attracted to radioactivity, and it even gives the Mutos their own counter-tactic against modern humans: the ability to project EMP waves that paralyze electrical functions.

Sad to say, this attention to mining earlier tropes provides G-2014's only attraction. While G-1998 is a competent blockbuster, G-2014 looks like it was made by a director trying to get noticed for his skill with military scenes (though apparently Gareth Edwards' only feature-length film was another creature-work, MONSTERS, which I have not seen).

The film suffers not just from dull human viewpoint characters, but also from an initial bifurcation of viewpoint. The initiating setup begins with Joe Brody, supervisor at a U.S.-Japanese atomic plant, who loses his beloved wife to an apparent nuclear meltdown. However, fifteen years later, Joe tries to convince his grown son Ford-- the real viewpoint character of the movie-- that the meltdown is actually a government cover-up for an anomalous event. Joe perishes, but Ford inherits his mission, and becomes the viewer's-eye that witnesses the cause of the anomaly, the resurrection of one of the Mutos. This creature's appearance brings forth its mate, as well as another prehistoric creature, one that preys on Mutos. A Japanese scientist (cannily named "Serizawa") gives this "alpha predator" the name of "Gojira."

The possible consequences of the Mutos mating and spreading more of their kind seems somewhat derivative of G-1998, and they become the film's central threat, with Godzilla as something of a coincidental rescuer. But Godzilla is sorely under-used, and the design of the Mutos is unimpressive-- when one can see anything at all, given that the lack of electricity eventuates in far too many scenes shot in partial darkness. Even the outdoor scenes are hard to see, though Edwards seems to find plenty of light when it comes to depicting military goings-on.

I wasn't crazy about SHIN GODZILLA devoting far too much attention to the humans buzzing around and trying to dope out the big monster. But at least some of the dialogue was okay, and the explanations of Godzilla's freakish nature were interesting. I can't say that any of the human characters of G-2014 held my attention even as well as Nick Tatoupoulos.
Posted by Gene Phillips at 3:12 PM
Email ThisBlogThis!Share to TwitterShare to FacebookShare to Pinterest
Labels: combative dramas, the marvelous