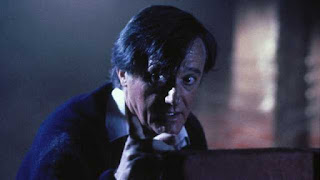 Film-adaptations of E.A. Poe are almost never adaptations as such. More often they're grab-bags of tropes taken from several Poe tales, and nothing exhibits this tendency more than Gerald Kikoine's EDGAR ALLAN POE'S BURIED ALIVE.

With a title like that, one might fairly expect that the scriptwriter would build, at least partly, on the two most famous Poe-stories involving immurement: "The Premature Burial," or "The Cask of Amontillado." But BURIED only borrows one motif from "Cask," and sticks it into a scenario that slightly resembles Poe's asylum-run-by-inmates tale, "The System of Doctor Tarr and Professor Fether."

Yet even here, Kikoine and his scripters-- both of whom show no other credits on IMDB-- tosses aside the irony of a mental hospital run by madmen. Instead, the story takes place in the melodramatically named "Ravenscroft Institute," which is a correctional home for teenage girls. The opening "teaser" scene shows one of the girls seeking to escape the institution, only to be beaten down and murdered by a killer wearing a Ronald Reagan mask.

The viewpoint character is Janet (Karen Witter), a new instructor, hired by headmaster Julian (Robert Vaughn). It's made clear that Janet and Julian have already made each other's acquaintance, with the strong suggestion that they've enjoyed some romantic interlude, and that this strongly influenced the process by which Janet got the job.

Once there, Janet has to butt heads with teenagers who don't give her any respect. There's surprisingly little exploitation of the girls' charms, particularly since director Kikoine had a long list of softcore sex movies previous to this, and largely ended his career after doing this and one other horror-flick for trashmeister-producer Harry Alan Towers. However, Janet's real problem is that she starts having psychic flashes, imagining herself falling through the ground, or being entombed. In one of her conversations, it comes out that Janet and Julian both had tyrannical parents, but the script makes very little of Janet's past, focusing, rather transparently, on the fact that Julian's father-- also his predecessor in running Ravenscroft-- inflicted rather severe punishments on Julian.

It's in one of Janet's visions that the viewer gets a brief taste of Amontillado wine, when she witnesses a ghastly old man (John Carradine) breaking through a stone wall, grabbing Janet and ranting "Bad! Bad!" at her. The big reveal at the film's end is that Julian finally got so torqued at his mean dad that he walled him up behind one of the Ravenscroft walls, and that, ever since, the ghost has been sending weird visions to the residents, though somehow the revenant can't seem to torment the one who actually committed the murder. Janet is apparently a better medium for his message, in that she starts poking around into Ravenscroft's history-- leading to the lesser reveal that Julian is the killer. I say "lesser" because he's almost the only possible suspect, aside from another of the instructors, a dotty fellow played by Donald Pleasence (easily the best perf in the film). I never did understand why Julian was killing off various girls, but Janet finds evidence of his earlier murders, leading to a conclusion in which the ghost very belatedly evinces enough power to avenge his murder.

The most significant aspect of BURIED ALIVE is that it's the final role of horror icon John Carradine, though as a role it is-- in more ways than one-- pretty insubstantial.

Posted by Gene Phillips at 2:35 PM
Email ThisBlogThis!Share to TwitterShare to FacebookShare to Pinterest
Labels: the marvelous