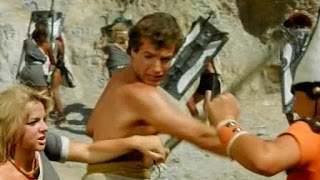 
I reviewed the sequel to this film here, where I said, among other things-


I should note that THOR was filmed back-to-back with another peplum with the same star and director, TAUR THE MIGHTY.  Both "Thor" and "Taur" were toss-off names applied to a hero who, the story goes, was originally going to be called "Tarzan" until the Edgar Rice Burroughs organization took exception.  This goes a long way toward explaining why the protagonist has no resemblance to the Scandinavian thunder-god of mythic and comic-book fame.

Until recently I'd never been able to view this film, which was probably shot back to back with the second given the use of many of the same actors in different roles, aside from the main character and his sidekick. Now that I've seen the standard English version of TAUR, I can state, for what little it's worth, that the dub calls Taur "Thor," just as did THOR AND THE AMAZON WOMEN. Though neither film is a classic, even for the peplum subgenre, TAUR feels almost like a less colorful dry-run for AMAZON WOMEN, which has more interesting incidents amid its equally formulaic script.

TAUR starts off with two royal sisters, Illa and Tuja, being hassled by a couple of enemy soldiers out in the wilds of what might be North Africa (actually shot in Yugoslavia). To their rescue comes a tough young fellow-- but no, it's not Taur, but a young orphan, Syros, whom Thor found in the forest and raised as his son (sort of like Classic Hollywood Tarzan's relationship with "Boy.") Syros beats off the baddies and returns the girls to their father the King of Some Kingdom. Syros asks for the hand of blonde Illa and the king agrees. They start planning a wedding, and since they figure Thor ought to attend, the king sends a Black African servant, Ubaratutu, to fetch Thor for the festivities.
Ubaratutu, it should be noted, is just as muscular as Thor, but occasionally shows a streak of cowardice, a streak which isn't apparent in AMAZON WOMEN.

A little later, Thor and Ubaratutu arrive at Some Kingdom, but they find only corpses, since the neighboring warriors of Quesos (?) have carried away as slaves everyone they didn't kill. Since Syros isn't among the dead, Thor insists that Ubaratutu come along as they seek out the Quesos realm and free Thor's buddy.

The heroes soon learn that most of the survivors of the raid have been confined underground, where they're forced to mine gold and refine it in a rather anachronistic furnace (complete with conveyor belt!) The women get different treatment, being trained as sword-wielding warriors to fight in some arena somewhere. Both Illa and Tuja have survived to join these almost-Amazons, though the script's only reason for keeping both alive is to force them to fight each other blindfolded later on. The tyrants in charge of the operation are Queen Akiba and her high priest El Kab, who are pretty much your standard evil rulers. Since Thor can't immediately free everyone from the soldiers, he and Ubaratutu blend in with the slaves, apparently with no real plan but getting close enough to figure out how to undermine (heh) the whole megilla.

For an Italian muscleman film, TAUR is pretty skimpy on romantic interludes, but it does offer an assortment of female-female sword-duels. Script and direction frequently takes advantage of comical possibilities, though a forced arena-fight between Thor and Ubaratutu seems designed to humiliate the black guy. (FWIW, he gets better treatment in AMAZON WOMEN.) Perhaps the funniest consequence of the English dubbing takes place when Illa, freed from captivity, chases Akiba into a cavern. Good girl corners bad girl alongside a crevasse, and then utters the deathless line, "I should kill you!"-- just before pushing Akiba into the crevasse. Maybe some dubber didn't know the difference between "should" and "am going to?"

Anyway, the evil mining operation gets blown up, the villains are slain, and the former slaves of Some Kingdom take over. Syros is all set to marry Illa once more, but instead of sticking around for the wedding, Thor informs Ubaratutu that it's time for them to go looking for a new adventure. And off they go, the peplum version of Ebony and Ivory-- even if they only get one more outing.

Posted by Gene Phillips at 2:30 PM
Email ThisBlogThis!Share to TwitterShare to FacebookShare to Pinterest
Labels: diabolical devices (u), exotic lands and customs (u), superlative skills (u), the uncanny