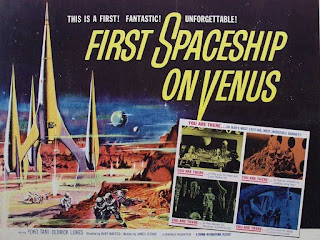 
It's 1985, and Earth had passed through a non-baptism of fire-- that is, the Earth nations managed to put aside their differences enough to cease menacing one another with nuclear fires, not unlike the history attributed to STAR TREK's Federation a bit later in the 1960s. However, amid all this international peace, scientists unearth a strange relic from the 1906 Tunguska meteor-strike. The item turns out to be a magnetic tape, apparently the last surviving remnant of a Venusian spaceship. Though the scientists labor to translate the tape, a multinational conference decides to investigate the possibility of life on Venus. As it happens, the Soviets had prepared a ship, the Kosmokrator, for a journey to Mars, but the agenda is changed, and a multinational crew of experts is selected. As is par for the course in such films, there are no national duplications: there's one Russian, one American, one Black African, one Japanese, and so on. (Reputedly the American release altered some of the nationalities as established in the original German/Polish film.)

Not much is said about the method by which the Kosmokrator traverses the millions of miles separating Earth from Venus, but it doesn't take long and no one needs to enter cryosleep. There are a few soap-opera bits here and there-- the American Robert once had an affair with the Japanese lady doctor Sumiko-- but the trip has no major hiccups. There's even a slightly comical R2D2-ancestor, a little robot named Omega. However, partway to their destination, one of the scientists manages to fully translate the magnetic record, and the cosmonauts all learn that Venus sent one of their ships to Earth on a scout mission, prefatory to launching an attack. In the movie's most dramatic scene, the crew-mates have to decide whether or not to divulge this discovery to the people of Earth.

Though capable of simply turning the ship around and going home, the cosmonauts decide to forge onward, all the way to Venus. The ship sends down a landing-craft with Robert in command, but though he discovers some entities that look like bat-winged insects-- actually artificial in nature-- he learns that there are no longer any living Venusians. Further investigations indicate that the Venusians had been preparing atomic weapons with which to attack Earth, and ended up destroying themselves instead. There are even some outlines of slain Venusian bodies in certain walls, a clear reference to a historical phenomenon recorded in Hiroshima. However, the Earthpeople's advent sets one of the doomsday machines in motion, and now they have to endeavor to prevent the Venusians' deadly plans from coming to fruition.

VENUS, purportedly based on a Stanislaw Lem book, never develops either its characters or its theme of an atomic specter that returns to haunt human civilization. Oddly, in the same year an American independent company released another space-voyage tale involving a multinational crew, TWELVE TO THE MOON, which, while no classic, was somewhat more engaging. 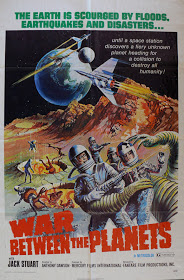 Stodgy as VENUS is, it's far more watchable than PLANET ON THE PROWL, which title I prefer to the original WAR BETWEEN THE PLANETS.

PROWL is the third entry in Italy's so-called "Gamma One" series, preceded by THE WILD WILD PLANET and WAR OF THE PLANETS. Both of these are decent cheapjack soap-opera, but though Film #3 takes place in the same future-Earth environment, the characters of the first two films are jettisoned in favor of a new cast. all of whom manage to be even less well-defined than the first group. As memory serves, the fourth and last film returns to the action-orientation of the first two flicks.

Unfortunately, even though schlock-meister director Antonio Margheriti helmed all four films, he or another producer decided to dust off a SF-trope that had become hoary even by 1966: a gigantic asteroid on a collision course with the Earth. As the asteroid comes closer, the planet suffers cataclysms, forcing the Earthpeople to send a spaceship to deal with the cosmic intruder. Suffice to say that even the astronauts don't seem to have any sort of plan in mind, they manage to destroy the asteroid, which may or may not be a living thing. In place of good action, there are a lot of scenes of actors clambering over phony asteroid-parts. There is one fistfight between the ship's commander and a subordinate, and that's about it for PROWL.