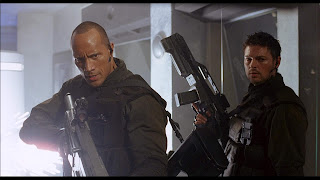 
I've no familiarity with the 1993 video game DOOM or any of its later iterations. Wikipedia informs me that the original concept's "first-person shooter" scenario took a lone gunman  to the planet Mars, where he shoots it out with an assortment of demons from Hell itself. In contrast, the movie DOOM remains firmly within a science-fiction universe, aside from a highly speculative assertion by a scientist that there may be a genetic code for the human soul.

The year is 2046, and humankind has gained access to Mars by finding a teleport-device, left in Nevada by ancient Martians who apparently deserted their planet. There's no evidence as to what happened to the emigrants, and Mars itself shows no trace of living creatures, but a facility of Earth-scientists has been built on the planet to study the remains of the long-dead denizens. When communication between Mars and Earth breaks down, a squad of Marines, all armed to the teeth with advanced weapons, are sent via portal to Mars to rescue the scientists and, perhaps more importantly, their research. However, once there, the soldiers are repeatedly attacked by monsters.

Because of the combination of marines and monsters, some critics chose to see DOOM as overly indebted to the 1986 ALIENS. There are rough similarities, particularly the idea of humans attempting to co-opt alien science or resources for human military advantage. As in ALIENS, most of the military grunts are "doomed" to become cannon fodder. However, the David Callaham-Wesley Strick script emphasizes the way in which the monsters from the outside are identical to those on the inside.

Only three characters are of great consequence: the mission-leader "Sarge" (Dwayne Johnson), his subordinate "Reaper" (Karl Urban), and Samantha Grimm (Rosamund Pyke), who, in addition to being one of the facility's scientists, is also Reaper's twin sister. In between conflicts with monsters, Samantha eventually reveals that her fellow scientists performed a genetic analysis of the human-like inhabitants of Mars. The oldest remains of Martians showed 23 pairs of chromosomes, just like humans, but later Martians had 24 pairs. Samantha theorizes that the 24th chromosomal pair was synthetic, and that it boosted the strength and healing-powers of the natives. However, she further theorized that the genetic tinkering caused a cultural upheaval that resulted in the extermination of the race, including, presumably, those that failed to colonize Earth.

The plot-device of the long-distant upheaval recalls a similar trope from 1956's FORBIDDEN PLANET. In that film, the humans who investigate the titular world learn that its long-vanished native race invented mind-boosting machines that unleashed the "demons of the id," so that the natives destroyed themselves in their quest for advancement. In the course of all the monster-slaying, Samantha observes that although some monsters came about from the project using human test-servants, and others were "infected" by contact with mutated persons, the infection doesn't spread to everyone. She observes that the genetic mutation occurs only in persons who have a propensity for excessive violence in their (figurative) souls. This leads to a combative confrontation for Reaper, for his superior officer Sarge soon reveals the dark nature hidden behind his military facade. Fortunately, Reaper, who also gets exposed to the genetic mutagen, also has his positive nature boosted by the mutagen. Overall, I found DOOM a reasonably good example of military SF-cinema, though I found tedious the movie's attempt to reproduce a "first-person shooter" scenario. Happily, it only took up about five minutes toward the end.

Whereas ALIENS is a film in which the titular extraterrestrials are on center stage, dwarfing the importance of the space-marines fighting them, determining the "main characters" of DOOM becomes a little more dicey, given that the actual Martians are all dead. However, their genetic legacy-- that of passing on the mutagen  that can enhance either "good" or "evil"-- has more central importance to the narrative than any of the three human characters. A quick check of Wikis about the video game suggests that there's no generic name for the "Doom Monsters," probably because they are largely supposed to be either Hell-demons or humans possessed by demons. So for my own satisfaction, I'll state that the stars of DOOM are indeed the "Doom Mutants"-- and, since both Sarge and Reaper become affected by the mutagen, they become reflections of the mutagen's potential to create both monsters and monster-fighting heroes.

ADDENDUM: Though there are no literal devils in the movie, it's interesting that in one scene Samantha demonstrates that mutagen-infected flesh literally goes out of its way to infect violent people, and ignores those who are not so spiritually polluted. This may be a psuedo-scientific way of saying that people who have already "signed over the souls to the Devil" are the main victims of the mutagen.

Posted by Gene Phillips at 12:08 PM
Email ThisBlogThis!Share to TwitterShare to FacebookShare to Pinterest
Labels: combative dramas, the marvelous