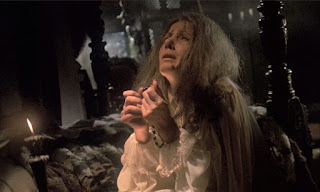 
COUNTESS DRACULA is something of a Hammer anomaly for a couple of reasons, neither of which has to do with the studio's use of the name "Dracula" to sell a film based on the crimes of 16th-century noblewoman Erzebet Bathory.

First, COUNTESS was only Ingrid Pitt's second starring film-role, after her moneymaking debut in 1970''s THE VAMPIRE LOVERS-- and yet, COUNTESS had Pitt conceal her beauty beneath old-age makeup for many of her scenes-- which probably was something of a turn-off for viewers who wanted to see Pitt follow up on her earlier, very sexy performance.

Second, though there are various scenes of bloody violence, in keeping with Hammer's increasing penchant for exploitation, they're fairly low-key for Hammer and for the director Peter Sasdy, who showed far more flair for cinematic violence both in his previous movie TASTE THE BLOOD OF DRACULA and in the one that immediately followed COUNTESS, HANDS OF THE RIPPER. Perhaps Sasdy or his producer (Alexander Paal, also one of the film's scripters) had some notion of using the Bathory legend to make a comment on the dangers of vanity. Coming from Hammer Films, such a righteous message seems a little like a barman give lectures on the virtues of teetotalling.

The script also fails to "up the game" once the setup's been established. Elizabeth, an aging noblewoman recently widowed, listens to the reading of her late husband's will and learns that she must share the inheritance with her daughter Ilona, currently attending school far from the Bathory castle. By accident Elizabeth learns that when she's exposed to fresh blood, her wizened skin becomes rejuvenated, though this is given no real explanation whatever, and her few confidantes just take this miracle in stride. Being one of Hammer's many nasty aristocrats, Elizabeth begins exsanguinating various female victims, though far less than the historical Bathory allegedly did, and for a time, the countess enjoys being young again. A young nobleman, Imre, arrives at court as part of an arranged marriage to Ilona, whom Imre has never met, so Elizabeth simply usurps her daughter's place and makes passionate love to the younger man-- much to the disgust of her confidante Dobi, an older man who liked the countess the way she was. Receiving news that Ilona is scheduled to return to the castle soon, Elizabeth arranged for her to be waylaid and imprisoned, so that Elizabeth can continue living the life of a young woman.

Despite a solid performance by Pitt, the character of Elizabeth never comes alive. It goes without saying that almost everyone can identify with the desire to cast off the bonds of age in favor of renewed youth, but the viewer knows so little about Elizabeth that even her joy in regaining said youth falls flat. Even a political reading of the Bathory story-- the ruthless noble, literally bleeding the life out of the lower classes-- gets less textual support from COUNTESS's script than one can find in any of the "regular" Hammer vampire flicks. Only once did I find myself repulsed by a character's immoral action, and that was in a scene where Elizabeth's nurse, a commoner who simply hitches her wagon to the Countess's star, makes it clear that she'll do anything to protect her meal ticket.

The other narrative flaw is that Elizabeth remains largely confined to the castle and the surrounding terrain, so that she doesn't really DO anything. Imre and Ilona don't come alive as characters, and though there's one clever line in which Dobi tells Imre that the ideal mate is also a "mother," COUNTESS has none of the interesting Oedipal themes found in Sasdy's RIPPER.

Posted by Gene Phillips at 1:10 PM
Email ThisBlogThis!Share to TwitterShare to FacebookShare to Pinterest
Labels: the marvelous