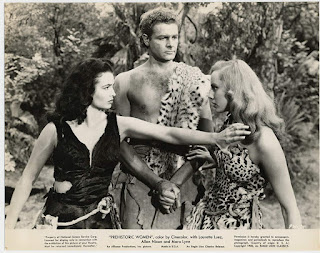 
There had been a lot of cavemen-comedies before PREHISTORIC WOMEN, but up to 1950, this is probably the best, with writer-director Gregg G. Tallas mining the tradition of the Greek Amazons to

sow dissent between the sexes in prehistoric times.

Since none of the cave-people speak English, a narrator serves to tell the viewers what's going on for most of the film. Thus it's through the narrator that we learn that, in contrast to the Classical Amazons, the "Prehistoric Women" of the title only separate themselves from men for one generation. Following a prologue that shows some cave-women dancing wildly in "frustration"-- particularly dark-haired Tigri (Laurette Luez)-- we learn that some years ago Tigri's mother Tana rebelled against the men who tyrannized the tribe's women, and beaned the chief with a rock. Then all the women of the tribe followed Tana to make a separate tribe with their children, who were apparently all girls, since Tigri grows to womanhood with no men around.

However, Tigri and her fellow cave-women don't want their tribe to die out for lack of available males, so they anticipate the later practices of the Greek Amazons and quest forth to abduct male slaves. The girls happen upon the young men of the tribe from which Tana fled, though viewers never see any of the mean older men of Tana's time. Instead, the only men are a bunch of young studs out hunting. It's not clear whether or not Tigri's group has ever encountered the cave-studs before, but the cave-girls have an advantage, being armed with slings that swiftly clobber most of the guys. One caveman, Engor, escapes to contemplate what he'll do to rescue his friends.

The girls bring the guys back to their village, using the threat of their pet black panther to insure that the men accede to their new slave-status. The guys don't seem to mind being lorded over by the women too much, probably because the girls are all hotties. Engor, while following in the tracks of the Prehistoric Women, accidentally discovers how to make fire. However, this doesn't immediately help him in the village, for the girls overpower him as well. Tigri, who hasn't selected her own mate-of-convenience yet, chooses Engor for herself and fights off a competitor. However, when a pterodactyl (played by what looks like a pelican) attacks the village and threatens to carry off Tigri, Engor manages to drive off the beast with a torch. Having put the women in their place, the men assume dominance once more, and Engor considers bringing all the fugitive women back to the original tribe.

Happily, the patriarchy doesn't get any further than the matriarchy, thanks to the menace of a nine-foot-caveman named Guadi. Having menaced the cave-people on other occasions, this embodiment of male aggression, who apparently has no female equivalent, attacks Engor's new tribe. Engor is ultimately able to destroy Guadi by setting the forest ablaze. The cave-girls don't do anything to bring this state of affairs, but with Guadi gone, Engor changes his mind and decides that they will all return to the village and carry on with their new tribe, that respects both men and women.

Though the scenario is risible, as are the gorgeously coiffed cave-girls, Tallas's comedy has some clever "war between the sexes" bits, and thus PREHISTORIC WOMEN remains moderately charming despite its low budget.
Posted by Gene Phillips at 3:57 PM
Email ThisBlogThis!Share to TwitterShare to FacebookShare to Pinterest
Labels: exotic lands and customs (u), the uncanny