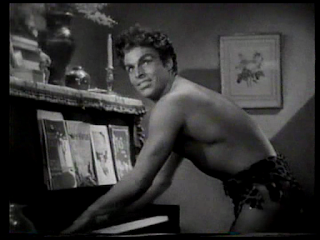 
One year after the debut of Johnny Weismuller in TARZAN THE APE MAN, and some months before Buster Crabbe essayed the role in TARZAN THE FEARLESS, Crabbe had the chance to essay one of the more atypical "ape man" knockoffs in KING OF THE JUNGLE.

I've not read the original novel on which KING is based, Charles Thurley Stoneham's THE LION'S WAY, serialized in 1929. But since the book concerned a young boy being adopted by lions, I think it's pretty likely that Stoneham borrowed his idea from E.R. Burroughs, since Tarzan had been around for over ten years previous. Yet if KING is an accurate representation of the source novel, then Stoneham certainly wasn't a slavish swiper. The author's hero "Kaspa the Lion Man" may have a pedagogical upbringing akin to Tarzan's, but Stoneham's hero may be the least wild of all the wild men.

Director H. Bruce Humberstone-- who would later helm two official Tarzan films-- quickly moves past the "origin story," in which a blase couple go traveling in the Congo and promptly get killed, leaving their toddler son to be adopted by a lion. The boy grows to studly manhood amid a pride of lions, communicating with them only through roaring noises. The nearby natives leave the "lion man" alone, but white hunters capture him, and soon a promoter named Forbes (future "Charlie Chan"Sidney Toler) decides that the wild foundling will be perfect for his circus, dubbing the nameless youth "Kaspa the Lion Man."

It's significant that even though Crabbe's character looks just as buff-and-tough as Weismuller's ape man, Kaspa isn't seen getting into fights. He and some of his lion-brothers are captured in a pit, and then shipped to America in cages. A customs official foolishly lets Kaspa out of his cage, whereupon he swims to shore and mostly avoids the pursuing constables rather than fighting with them. He meets his "Jane," a schoolteacher named Ann (Frances Dee), and she "tames" him rather easily, in particular charming the savage beast with piano music. Through her influence Kaspa more or less resigns himself to joining Forbes' circus, not as an attraction but as a lion-tamer able to put his brethren through their paces. Kaspa becomes civilized enough to learn how he can make enough money to buy back the lions and return to the jungle with them, but in the meantime he and Ann fall into a very chaste love. (The only acknowledgement of sex comes through a few of the female circus performers, who make clear that they like the way Kaspa fills out a loincloth.)

Since the script hasn't really set up a villain as such-- Forbes being a reasonable fellow who more or less forgets about his desire to exhibit/enslave Kaspa-- a minor villain is tossed in, a fellow who loses a hand to a lion and then tries to destroy the beasts. All he succeeds in doing is starting a fire that ravages the circus and unleashes many of the animals (a standout scene being one where some elephants run amuck in a city-street, knocking over cars and a fire hydrant). Kaspa's only heroic deed in the film consists of keeping his leonine siblings from either killing or being killed, which then leads to a happy-ending resolution.

Since KING has so little in common with the sexy, savage world of W.S. Van Dyke's TARZAN THE APE MAN, I'll conjecture that Paramount simply bought the option on Stoneham's 1929 work as one of many acquisitions, and then rushed KING into production in order to take advantage of APE MAN's release, without actually seeking to tailor the film to resemble any previous cinematic Tarzan iterations. KING is something of a forerunner to the 1984 film GREYSTOKE, in paying more attention to the foundling's personal life than to exotic adventure, but most of the script is banal, despite the fact that one of the three scripters was the celebrated author Philip Wylie. I've no way of knowing how much Wylie contributed, but it's interesting that his earlier novel GLADIATOR resembles KING OF THE JUNGLE, since GLADIATOR is also about a hero for whom internal dramatics are more important than extroverted adventures.
Posted by Gene Phillips at 2:37 PM
Email ThisBlogThis!Share to TwitterShare to FacebookShare to Pinterest
Labels: the uncanny