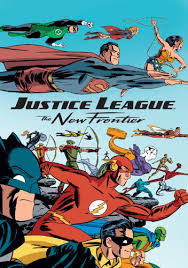 This adaptation of Darwyn Cooke’s 2004 graphic novel, DC: THE NEW FRONTIER, received the implicit imprimatur of the artist, in that Cooke is credited with providing “additional material” to the script by Stan Berkowitz. Nevertheless, most of the things that made the graphic novel unique have been sacrificed for the 75-minute running time, and possibly also in order to earn the PG-13 rating.

I can appreciate the efficiency with which the sprawling graphic novel has been condensed. For instance, the Lovecraftian menace of the Centre—a dinosaur-inhabited island derived from a DC Comics’ Silver Age feature—benefits from the condensation, providing a more consistent sense of danger to the heroes. Not surprisingly, the film also purges all of Cooke’s callbacks to DC’s history of non-superheroic adventures, though some of them—the Blackhawks, the Challengers of the Unknown—make glorified cameos that may confuse newbies to the DC Universe. Since the title of the film does not celebrate DC Comics in general, but rather the specific history of the Justice League, the costumed characters get almost all of the attention.

JLTNF is still essentially faithful to the major story-arcs of Cooke’s narrative, particularly those arcs involving the Hal Jordan Green Lantern, the Barry Allen Flash, and the Martian Manhunter. JLTNF does drop one of the important subplots involving Superman and Batman, and in compensation the two heroes get some extremely minor new scenes. In addition, the film is careful to keep all the key emotional scenes that involved any of the major superheroes.

What most hurts the film as an adaptation is that the script fails to provide context in terms of two histories, both real-world history and the history of the DC Universe. Cooke’s graphic novel built on established continuity, in which all of the costumed heroes of the 1940s, including but not limited to the Justice Society, find themselves forbidden to keep operating by politicians and postwar paranoia. Within the history of DC Comics, this retroactive continuity was introduced to explain why so many 1940s heroes quit fighting crime in the 1950s (the real-history reason being that superheroes fell out of favor and simply got cancelled). Cooke elaborated on the 1950s outbreak of fear about Communists, people of color and “little green men,” and used it as a springboard to celebrate the rebirth of DC costumed heroes in the late 1950s. However, JLTNF speeds past the expository section, so that a viewer not already familiar with the comics would barely understand what happened to the Justice Society. The matter of American paranoia is watered down, and most of Cooke’s comments, insightful or not, regarding the marginalization of colored people just disappear. The only scene that adequately captures the sense of governmental overreach appears when federal agents attempt to capture Barry Allen—the quintessence of the straight-arrow superhero—and put him in some black-ops prison for his vigilante actions.

A few of the non-superhero characters—spy-master King Faraday and commando-commander Rick Flagg—still appear in supporting roles. But Cooke elaborated a vision of heroism that included both ordinary, skilled mortals and the characters with godlike powers. But JLTNF doesn’t even suggest such a vision, and the result is that it’s just another animated adventure of the Justice League--admittedly with better graphics-- but nothing more.

Posted by Gene Phillips at 12:37 PM
Email ThisBlogThis!Share to TwitterShare to FacebookShare to Pinterest
Labels: combative adventures, the marvelous