ALLAN QUATERMAIN AND THE TEMPLE OF SKULLS (2008) 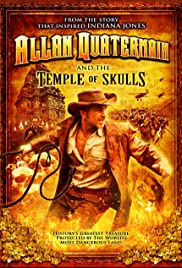 
Big surprise: a mockbuster-film, created to coast on the success of a bigger-budget release, proves disappointing. For me, though, the disappointment has nothing to do with TEMPLE failing to equal INDIANA JONES AND THE TEMPLE OF THE CRYSTAL SKULL. Rather, it’s a letdown to see another half-assed adaptation of Rider Haggard’s 1885 classic KING SOLOMON’S MINES. The only interest the film sustains for me is the question as to whether it’s a worse adaptation of the book than the long and lumbering 2004 Hallmark Channel rendering. Both are about equally (and pointlessly) unfaithful to the book, but TEMPLE is at least over with more quickly. So I guess it’s only second worst.

As in the book, white hunter Quatermain (Sean Cameron Michael) is engaged to take a party into an unexplored African region to look for a missing European, the brother of one Henry Curtis. The missing man went looking for treasure, hoping to find the legendary diamond mines of King Solomon. In the book the hunter’s expedition is all-male. But for decades, most if not all cinematic adaptations of the Haggard work have worked in a female lead, so this change is at least expected. Still, in the 1937 film the expedition starts out all-male and is forced to add a female character who needs an escort back to civilization. Here, Curtis wants to bring along his cousin Lady Anna (Natalie Stone) for no reason, unless he anticipates that Quatermain will need a romantic interest. (FWIW, the actress puts in the best performance in this limp noodle.) TEMPLE also adds a villain, Ainsley, who like the missing man wants to find the fabulous treasures of Solomon (which I think are somehow associated with the “temple” of the title). Ainsley—played with great hamminess by Christopher Adamson, as if he thought he might become the new Chris Lee—claims to be from South Africa, but he later appears to be a Nazi, though nothing else about the film suggests the 1930s.

After some dull scenes in which Quatermain and his two charges escape Ainsley’s wrath, the trio begins the slow, slow trek to what the book calls Kukuanaland. In the book a young African man, Umbopa, joins the expedition because he’s an exiled heir to the kingship of the isolated domain. TEMPLE makes its version of Umbopa into a female with the same purpose but no special martial skills, so that one wonders how she thinks she’s going to fight the guy in charge for the throne.

In the novel, the villains are the tribal chieftain Twala and his witchfinder henchwoman Gagool, who tyrannize the Kukuana people with their cruelties. In addition, the Kukuanas are so isolated from the rest of Africa that nearly none of the people have ever seen a white person. In the book most of the Kukuanas mistake the white adventurers for gods, and treat them as such until Gagool—the power behind the throne, as it were—exposes the heroes for mere mortals. Though I don’t think this trope is inherently racist, and though I don’t think Haggard uses it negatively, I also don’t fault TEMPLE for dropping this particular aspect of the story. In fact, the only thing the movie gets right is that the Kukuanas, though somewhat more aware of white people than their prose predecessors, are believably diffident about these pale-skinned intruders. The movie’s best scene, possibly drawn from one of the film adaptations, takes place after Henry is reunited with his lost brother. Some of the male natives surround the duo and start chanting; as if seeking to exorcise the white demons. Yet the tribesmen fall silent when the brothers start singing an English hymn, implicitly because the music is so unlike anything the Africans have ever heard. On a minor note, political correctness also does not force the tribal women to cover up, but allows them to show their bosoms openly.

However, such correctness does crop up in the film’s decision to de-emphasize Twala and Gagool. The nasty old witchfinder is only in the film for five minutes, though at least she illustrates the perils of superstition. After she points out a supposed witch among the gathered tribespeople, Gagool’s henchman cuts the victim’s head clean off with what looks like a big lobster-claw glove. Bad King Twala remains more indispensable to the narrative, but his evil is eclipsed by a greater evil—for somehow awful Ainsley has managed to reach Kukuanaland ahead of the expedition. Because Twala wants his little piece of heaven to stay isolated from the outside world, the chief makes a deal with the South African, to let Ainsley kill his enemies. However, Ainsley blows the whole deal when both he and Twala fall out over Lady Anna, at which point Ainsley kills Twala and flees with Anna. This development forces hero and villain to contend in the depths of Solomon’s Mines—as well as, incidentally, paving the way for Umbopa’s ascendance.

Sean Cameron Michael makes a dull Quatermain, but he’s given nearly nothing to work with, except in the middling romantic interludes with Stone’s Anna. Though the producers shot some or all of the film in South Africa, they seemed to go out of their way to select mild, unimposing locales for the shoot—such as the great mountains of the novel, “Sheba’s Breasts,” which in the movie become a couple of mildly rolling hills. If the filmmakers couldn’t find good locations, they might have well lensed the whole thing in Hollywood.

Posted by Gene Phillips at 12:07 PM
Email ThisBlogThis!Share to TwitterShare to FacebookShare to Pinterest
Labels: combative adventures, diabolical devices (u), exotic lands and customs (u), the uncanny