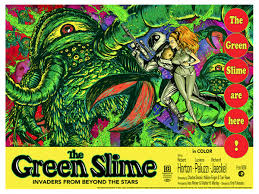 Like the following year’s LATITUDE ZERO, THE GREEN SLIME had its origins in a collaboration between an American producer and the Japanese studio Toei. Japan supplied the location shooting, the director and the crew, while MGM provided funding and a handful of American actors (though most of the support-cast was made up of Caucasians who lived and worked in Japan). SLIME was also conceptually connected to a series of space-opera films helmed by Italian workhorse Antonio Marghiretti, though the finished product was not given any explicit ties to the Italian series. (Whether or not the Italians contributed leading lady Luciana Paluzzi, I do not know.) American producer Ian Reiner contributed the basic story idea, but the finished screenplay earns some marks on the trivia-meter because one of the three authors was Bill “co-creator of Batman” Finger. Sadly, all of these notations on SLIME’s behind-the-scenes production are more interesting than the film itself.

Nearly all of SLIME’s action takes place in outer space, at a time when the forces of Earth have successfully tamed the solar system with spaceships and space stations. (So little action takes place on Earth that there’s no indications as to the planet’s sociocultural makeup, though it sounds like Americans are pretty much on top of everything.) A giant asteroid careens into the solar system, threatening Earth. An expedition takes off from Space Staiton Gamma, co-commanded by two officers, Rankin (Robert Horton) and Elliott (Richard Jaekyl). The astronauts successfully land on the asteroid, plant explosive charges on it, and take off again, after which that particular threat to Earth ends with the asteroid’s explosion.

However, one of the crewmen steps in some “green slime” while on the asteroid. The slime—rather than being wiped out when exposed to radiation in the station’s decontamination chamber—is actually strengthened by the radiation, and grows into a one-eyed, tentacled green monster. The first time the creature is shot by ray-blasters, its blood propagates into more of the Slime-kind, slowly overwhelming the astronauts.

Director Kinji Fukasaki, unlike his contemporary Ishiro Honda, had far more success with down-to-earth drama than with the metaphenomenal genres. However, he does keep the action constant, though the rubbery, pop-eyed slime-monsters probably didn’t give too many American kids any nightmares. There is an amusing theme “Green Slime” theme song that bookends the film, but the script is too pedestrian to birth any worthwhile “so bad it’s good” moments.

I re-watched the film in part to see if the monsters of the title were the actual stars of the show, but the main character is actually Commander Rankin. He and Commander Elliott are romantic rivals for Lisa (Paluzzi), though at the time that Rankin is assigned to Elliott’s station, Lisa has thrown Rankin over and become engaged to Elliott. But even that aspect of the commanders’ relationship pales beside their roles as the spacefaring versions of Goofus and Gallant. Elliott is Goofus, constantly making bonehead errors and never learning from them, while Rankin is Gallant, who’s inevitably right about everything—even though his uncompromising rightness costs him a girlfriend for a time. However, the invasion of the Green Slime works out well for Rankin, for Elliott, haunted by his failures, sacrifices his life to rid the universe of the Green Slime—implicitly clearing Rankin’s path straight back into Lisa’s arms.

Posted by Gene Phillips at 12:49 PM
Email ThisBlogThis!Share to TwitterShare to FacebookShare to Pinterest
Labels: combative dramas, the marvelous