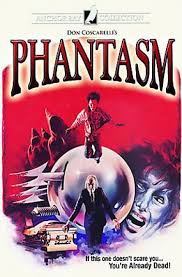 
In two essays, here and here, I spent some time showing how one subcombative horror-film, Sam Raimi’s 1983 EVIL DEAD, started out as a story about demons wasting a cabin-ful of disposable victims. Then, after the first film's success, the next two film sequels moved into combative territory, building up one character, Bruce Campbell’s Ash, as a formidable demon-slayer. I was aware of a similar transformation in Don Coscarelli’s PHANTASM series, but I hadn’t realized that Coscarelli was ahead of Raimi in both departments. That said, except for sharing some of the same “splatter” techniques, PHANTASM does not greatly resemble the EVIL DEAD series in tone.

In Stephen King’s book DANSE MACABRE, he claims that his son defined death as “when the monsters get you,” and Coscarelli’s PHANTASM embodies that attitude toward fatality. The film opens in a downbeat manner, as three small-town residents—Mike, his older brother Jody, and their mutual friend Reggie—mourn the loss of another friend, Tommy. Unlike the mourners, the viewers of the film know that Tommy was murdered by a strange demon-woman. However, Mike observes suspicious activity on the part of the funeral home's head mortician—a gaunt old fellow billed as “the Tall Man” (Angus Scrimm). Young Mike’s investigations reveal that the funeral home conceals a gateway to another world, and that the corpses of those interred at the graveyard are not allowed to rest in peace. Instead, the corpses are revived and mutated into dwarf-sized minions later called “Gravers,” and they’re sent through a dimensional portal to another world, where they serve as slave labor. However, when Mike tries to reveal his discovery to Jody and Reggie, they think he’s come unhinged, due to the effect of grief upon his young mind. Meanwhile, the Tall Man seeks to silence the boy who has uncovered his alien secrets.

Despite some fast-paced and ultraviolent scenes—particularly when the Tall Man unleashes unique weapons, silver spheres with knife-like attachments—PHANTASM always keeps a dream-like feeling of shifting realities, even after Mike finally manages to convince Jody and Reggie to the looming danger. Coscarelli’s script does not attempt to justify the Tall Man’s operation in terms of logical motivation, and thus, despite the science-fiction trappings, the monsters of the Morningside Funeral Home might as well be demons from the world of death, preying upon the bodies of the deceased simply out of general malice. In a similar manner, the later Freddy Krueger, nominally a vengeful revenant, would take on the stature of a child-killing demon. Jody perishes, leaving Michael and Reggie to struggle against the depredations of the iniquitous otherworlders. The film ends by suggesting that the heroes are ultimately defeated by the emissaries of death. 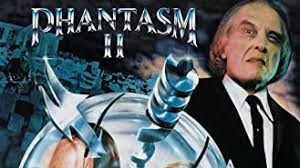 Seven years later, Coscarelli gives two of his characters, Mike and Reggie, the chance to become “fearless ghoul killers.” Mike was not killed as the end of the 1979 film suggested, but was declared insane and institutionalized for seven years, making him nineteen at the start of PHANTASM II. Reggie, for his part, has more or less forgotten his experiences of the first film, and when Mike once more tries to probe the mysteries of the funeral home, the older man tries to keep the younger one from exposing his obsessions. However, the boundaries between dream and reality break down once more. Mike has dreamed that Reggie’s house will blow up—and then it does, killing the older man’s family committing him to the cause.

The first film has no significant female characters; it’s purely a tale of men fighting demons. But here Mike also dreams of a young woman in another city, Liz, and tells Reggie that she too is being victimized by the Tall Man’s operations. Armed with a variety of weapons—a chainsaw, a drillbit, and various guns—the two men set out to prevent the death-demon from claiming more victims. For her part Liz suffers the loss of her grandmother, later made into a dwarf-thing by the aliens, but she acquits herself well in fighting back against the phantasmal evils.

Despite the sequel’s greater emphasis upon combative action, Coscarelli maintains the first film’s sense of oneiric dread, the feeling that at any given time the forces of the irrational can invade the waking world and sweep everything down to dusky death. In future posts I plan to examine the other three sequels, the better to judge their combative elements. As for the mythicity of the first two films, Coscarelli’s sci-fi rendering of the Great Unknown proves ingenious, but he never elaborates his general notion into a concrescent concept, which may be the overall result of his emphasis on unpredictability. And though many films about killing monsters center primarily on the monsters, here the monster-killers, both in their subcombative and combative phases, are the stars of the shows.

Posted by Gene Phillips at 12:36 PM
Email ThisBlogThis!Share to TwitterShare to FacebookShare to Pinterest
Labels: combative dramas, the marvelous