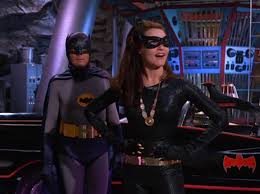 
Though this was the next-to-last of Julie Newmar’s Catwoman outings, “That Darn Catwoman” proves the best of them. Earlier episodes suggested that, despite his unwavering moral compass, Batman was unavoidably tempted by the enchanting evildoer's captivating charms. Catwoman, for her part, tried to find ways to bind Batman to her, even if it meant reducing him to a brainless hulk, as seen in "The Cat's Meow." In this episode, she comes up with the perfect way to convert the do-gooder to the forces of evil. The Princess of Plunder enlists teenaged protégé Pussycat (Leslie Gore) to test a new drug, cataphrenic, on Robin.The test prove a spectacular success. Upon meeting Pussycat, Robin doesn’t even seem tempted by the pretty young thing, and she complains that his “education” has been lacking. After he's been drugged, the Boy Wonder reacts more like a normal randy teen, hot to trot and ready for thrills.

Of course, one has to contemplate that since Catwoman’s main target is Batman, she probably could have found any number of ways to drug the Cowled Crusader when he was off-guard. In addition, there was nothing to stop her from doping him at the end of the episode’s first part, when her thugs have rendered Batman unconscious. But if she had done any of these things, the story would’ve fallen apart, so…

Scripter Stanley Ralph Ross sets Catwoman on a mission to gather lots of cash, the better to purchase some info that will lead to a major score. For once, Ross eschews a lot of his cornier humor, and cleaves closer to the camp aesthetic. Robin, before getting converted to evil, gives a lecture at the “Aaron Burr High School.” Catwoman’s three thugs—Spade, Marlow, and Templar—are named after three famed detecrive-heroes. There’s even a throwaway reference to a minor James Cagney movie, when the villainess tells Batman to drive her to “13 Rue Madeleine.”

Most of the episode’s first part revolves around the horror of solid citizens as they see Robin turned into a ruthless thug for Catwoman, one who doesn’t even remember Batman. Robin even attacks noble Batman, who won't fight back and thus gets creamed by his erstwhile partner. Catwoman even uses Batman’s earnest wish to see Robin revert to normalcy as a means to trap the hero. She then puts her foe in a de rigeur deathtrap, but there’s no daring escape in the second act. Batman merely pretends to accept Catwoman’s demand that he become her ally. Then, before she drugs him with cataphrenic, he cons her into letting him take a headache pill—which is actually a universal antidote. Again, a clever villain does something dumb so that the hero can come out on top. She even overlooks the way her supposed stooge's memory works in a very selective manner.
Nevertheless, the script’s minor lapses in logic don’t efface the strength of what I choose to call, after Thurber, “the war between Batmen and Catwomen.” Catwoman is designed to embody every temptress who ever lured a man into wicked ways, and Batman is the stalwart hero able to resist even massive temptation. “Good Batman” stays in the driver’s seat, but he can only succeed by pretending to be “Bad Batman,” by being both lust-driven and subordinate to his “cat-lady” boss. The show’s status of “family programming” assures that the hero doesn’t have to make the supreme sacrifice—though one can write one’s own story about what happened when the two spent the night in the Batcave, sans chaperone. Batman comes close to queering his own game by sending the cops to the Catlair to capture Robin and Pussycat. Nevertheless, Catwoman gets caught up in her gamesmanship and goes ahead with her big scheme. Robin regains his normal moral compass and shows up in time to help Batman beat up the henchmen. Catwoman escapes only so that she and Batman can have another quasi-romantic confrontation on top of a building, and this leads to yet another seeming accidental plunge for the Queen of Crime. In the final coda, a very subdued Batman gets the last words, wondering—correctly, as it turns out—if she only sacrificed one of her nine lives.
Posted by Gene Phillips at 2:37 PM
Email ThisBlogThis!Share to TwitterShare to FacebookShare to Pinterest
Labels: combative adventures, the marvelous