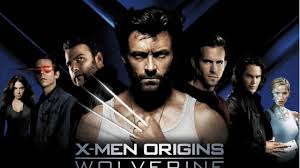 In my previous X-film reviews, I've noted that the filmmakers showed little ambition with regard to building a stable X-MEN brand. Instead of implementing scripts that allowed the major franchise-characters to play off one another, the filmmakers chose generally formulaic storylines, the better to plug in whatever new characters suited their grab-bag fancies. The producers never seemed to think that a stable ensemble might be a good thing, and so X-characters would come and go with little discernible pattern. Some of them, like Cyclops, left simply because the actor became engaged by other projects, and Fox Studios, already stuck with one breakout star in the franchise, probably did not want to put any of the other thespians under a long-term contract, given their opinion that they could plug in just about any character into any situation without alienating the superhero-movie fan.

The “breakout star” to which I referred is of course Hugh Jackman, whose talents made certain that the character he played outshone all of the others in the fluctuating ensemble, just as the comic-book character had outstripped his comrades in four-color popularity. Presumably one or more of the filmmakers anticipated duplicating the Wolverine popualrity, since the first film in the series makes the question of his dubious origins a primary narrative concern. Two films later, Fox decided to do a film centered only upon the character's origins, while tossing in a few random X-characters in order to lure in suckers who thought they were getting another mutant-ensemble film.

I've not re-read any of the “Wolverine origin” tales in some time, so I'll make no comparisons between the comics and ORIGINS. But the movie script seems concerned with little more than connecting some of the narrative dots established in the previous films.

Take for instance the sketchy picture of Wolverine's earliest-seen years, growing up in rural Canada circa 1845 alongside two vague parents and a half-brother, Saber-Tooth. (Obviously both characters have everyday names, but I'll stick with their superhero cognomens for clarity's sake.) After a hazy family falling-out, the brothers venture out into the cold, cruel world, and learn that they both have mutant powers, slowing their age-rates and gifting both with “healing factors” that allow them to heal all wounds. In addition, both have “claws” of one sort or the other, though the film must grunt and groan to get viewers to the place where the hero gets his adamantium upgrade.

Wolverine and Saber-Tooth both display animalistic rages, though the hero naturally seeks to control his more than does the future “evil mutant.” To judge by the film's temporal montage, the two brothers do absolutely nothing for the next hundred-plus years but serve in assorted military conflicts-- until we get to the latter part of the 20th century. Aroundthis time, the brothers are co-opted to join an American “Black Ops” team, composed entirely of mutants and headed by William Stryker, familiar to viewers as A Guy Who Knows Stuff About Wolverine's Mysterious Past.

The other mutants are, for the most part, randomly chosen minor players in the long-running X-saga, with one exception: Wade “Deadpool” Wilson, whose comic-book version enjoyed breakout success as well. However, the writers make this version of Deadpool into a figure of little importance, existing largely to provide a formidable opponent for the end-scenes, but not one well integrated into the story.

The Black Ops team spells the end of Wolverine's military career, as he finally gets disgusted, leave the team behind, and gets a lumberjacking job in Canada. He even gets a beautiful girlfriend, who, since she's not in the earlier films, practically has “red shirt” tattooed on her skull. No moviegoer will be the least bit surprised that the bad spymasters don't just leave Wolverine to his own devices. Stryker pays a call on the Canadian hero, relating that Wolverine's half-brother has started targeting the other members of the old team for no particular reason. In addition, most moviegoers, having already seen Stryker in a bad light, will suspect that he's not doing Wolverine any favors with this warning.

Sure enough, Saber-Tooth appears to kill off some people, including the lovely girlfriend, but it's all part of a larger deception, aimed at giving Wolverine a desire to upgrade his powers so as to be avenged on his half-brother. Stryker's plans make very little sense in terms of achieving any real-world goal; they're all about connecting those continuity-dots. Once Wolverine has his adamantium claws, the film devolves into an unholy mess about Stryker trying to create the ultimate mutant by crossbreeding powers, or something equally stupid. Supposedly the whole scheme is being funded by the U.S. Government, though they've only sent one general to oversee the operation, whom Stryker simply knocks off when it's convenient.

The film's only saving graces consist of Jackman's incredibly committed performance, shining through the dreck like a light-beam through fog, and a boxing-scene between the hero and the film's version of long-time X-enemy The Blob. The rest of it is just a big farrago of clumsily-executed FX-scenes and lots of poorly executed characters. The nicest thing one can say about ORIGINS is that it was so bad, the series had nowhere to go but up after this.

Posted by Gene Phillips at 6:33 PM
Email ThisBlogThis!Share to TwitterShare to FacebookShare to Pinterest
Labels: combative adventures, the marvelous