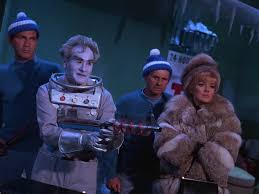 The last episode of the second season is also the last hurrah for Mister Freeze (this time played by Eli Wallach) on BATMAN ‘66. I would assume that the sci-fi villain and his icy motifs would have proved too expensive for the scaled-down budget of the series’ third season. But it may be just as well, since, to judge from Charles Hoffman’s script, nobody on the show had anything much to say about the cold-hearted crook any more.

The episode at least starts well, as the frigid fiend assails an ocean liner in his own private iceberg, a visual reference to every “Titanic” flick ever made. On board the liner is famed ice skater Glazia Glaze, who’s working hand in glove with Freeze to locate a passenger, Professor Isaacson. Isaacson has perfected a formula that would make possible the construction of an ice-ray powerful enough to immobilize an entire city. Freeze captures Isaacson and subjects him to icy torments to gain the formula, but the professor courageously holds out. Meanwhile Freeze also demands a ransom for the scientist, though he intends to keep both money and prisoner. Batman and Robin track Ffeeze to his lair, and after the usual fight his gang shoves them into a freezing-chamber. Freeze promises Glazia that she will be able to skate over the icy bodies of the crusaders, which is about the only outstanding dialogue in the narrative.

In the second segment, the duo escape through another lame contrivance, but Freeze and his gang have deserted the hideout. Freeze worms the formula out of the professor and demonstrates it on select portions of Gotham. The heroes overtake Freeze once more and win the second fight. Batman shows a particular desire to put down the beautiful Glazia by revealing that he knows her inglorious real name, Emma Strunk—which action presumably marks her as one of the many molls lured into crime by the promise of an instant path to fame and money.

Sadly, though I tend to consider Eli Wallach a better actor than Otto Preminger, Wallach brings no real personality to the villain. Sometimes Wallach raves about his grand plans a la Preminger, and other times he’s a little more low-key. There’s no trace of the careful planner portrayed by both Preminger and George Sanders, and so “Ice Spy” is relegated to the position of the least of the three Freeze outings.

Posted by Gene Phillips at 4:44 PM
Email ThisBlogThis!Share to TwitterShare to FacebookShare to Pinterest
Labels: combative adventures, the marvelous