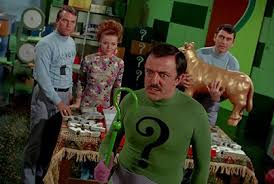 
Numerous reviewers have faulted actor John Astin for his one turn as the Riddler, during the period when Frank Gorshin was holding out for more money. It’s true that Astin is not as manic in the role as Gorshin. Still, the former “Gomez Addams” makes a valiant effort to capture the villain’s combination of egotism and daredevil flair. “Anniversary” biggest flaw is William D’Angelo’s weak script, which doesn’t really propound any good riddles for the Prince of Puzzlers. For instance, Riddler’s first challenge to the heroes tells them to look for “an engaging page”—though the conundrum doesn’t actually take the form of a riddle, and seems more appropriate for that one-shot foe, the Puzzler.

The “big score” this time comes close to stealing from Batman himself, though what Riddler actually rips off are assorted charity donations, being made by Gothamites to celebrate the anniversary of Batman initiating his anti-crime crusade in the city. The episode’s opening may the best scene in the show, since Batman is once again put in the positon of modestly refusing the accolades of Gotham citizens. To be sure, D’Angelo gives the Gothamites’ first contribution an odd form; that of a “golden calf,” which inevitably hearkens back to the pagan idol in the story of Moses. Like Catwoman in “That Darn Catwoman,” Riddler’s collecting dough in order to garner even greater power, Riddler uses the charity-cash to buy a pen-sized disintegrator from a destitute physicist. With this wild SF-device, the villain plans to hold the entire city ransom., but of course Batman has his own super-scientific resources, and once again the villain meets defeat.

One highlight is an amusing slow-motion battle between heroes and villains in the vault of a flooded bank. The deathtrap also proves visually inventive, in that Riddler lures the heroes into standing on top of a giant-sized commemorative cake, and the two crusaders almost sink into a cunningly arranged pit of quicksand.

Posted by Gene Phillips at 3:56 PM
Email ThisBlogThis!Share to TwitterShare to FacebookShare to Pinterest
Labels: combative adventures, the marvelous