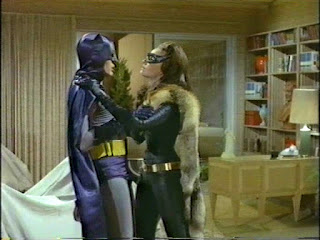 This was the last Catwoman appearance for Julie Newmar, and scripter Stanley Ralph Ross seemingly decided to ignore the continuity he had established (assuming, of course, that he was not told to pursue a different direction).

Catwoman’s apparent fatal fall is entirely forgotten, and as the episode begins, she’s in prison—but this time, Bruce Wayne himself is responsible for securing her early release. Though in other episodes Wayne is seen extending the hand of the philanthropist to erring criminals—mostly females like Blaze in “True or False Face”—this is the first time he personally sponsors a repeat offender. In both of the hero’s identities, he seems a good deal more smitten with Catwoman than in earlier episodes. In contrast, Catwoman’s affections for Batman seem to have cooled somewhat, since she attempts to kill him off when he wrecks one of her criminal schemes.

The moment Wayne springs Catwoman, she apparently has her next gambit all plotted out, for she remarks that she was a college dropout and plans to return to the halls of education to better herself. While she does attend classes—including one where Batman himself gives a lecture—her real plan is twofold.

First, she has her three flunkies—named for the colleges Penn, Brown, and Cornell—steal a statue of Batman.Though other villains didn’t need any such model to produce exact copies of the crusader’s costume, Catwman apparently requires one, in order to make a Bat-costume, so that one of her hoods can impersonate the hero, commit a crime, and get Batman arrested.

Second, she somehow gets in good with the entire student populace—though this is not shown—and encourages them to hold a sit-in. Naturally, no political grievances are cited for the protest: to some viewers in the sixties, protesting was just what students did all the time. The demonstration serves to distract the police while Catwoman and her gang steal a priceless set of gems known as “cat’s-eye opals.” The protest doesn’t keep Batman (who escapes jail on his own) and Robin from skirmishing with the gang. The heroes are captured, and Catwoman, despite having shared a romantic soda with Batman earlier, puts both crimefighters in the obligatory deathtrap. They escape with the obligatory lame effort, accompanied by Robin’s making some tedious comments about the “destiny” guiding their escapes.

Catwoman then has the displeasure of learning two hard facts of life. The first is that the fabulous opals are too hot to fence, so she can’t sell them. The second is that Batman somehow figured out Catwoman’s object—though the viewer is not privy to his logic-- and that he substituted phony stones for the opals. Having gone through a lot of trouble for nothing, the villainess throws profit to the wind and tries to use her sex appeal to lure Batman into a fatal trap. Again, she now seems utterly indifferent to the prospect of killing the man she supposedly loves—a sentiment she reaffirms at episode’s end—not to mention the fact that she had nothing specific to gain from Batman’s death at that time. Julie Newmar still gets a lot of sassy lines as always, which she delivers with aplomb, but once again scripter Ross gives in to cutesy humor. After her second deathtrap fails, the female felon makes a show of fighting Batman with “cat-rate,” and the hero sentenetiously replies that “karate” is purely a defensive martial art—which doubtless would come as a surprise to actual practitioners of the art. There are other oddball aspects of the script, as when Batman seems vaguely superstitious, and bumbling Commisioner Gordon even tells Batman that he Gordon once suspected that Bruce Wayne might be the masked manhunter—which gives the top cop more acuity than he ever had before. It’s a mixed bag at best, redeemed largely by the interactions of West and Newmar.

Posted by Gene Phillips at 4:16 PM
Email ThisBlogThis!Share to TwitterShare to FacebookShare to Pinterest
Labels: combative adventures, the marvelous