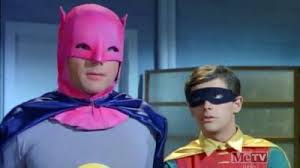 
The second and last outing for the Mad Hatter—once again scripted by Charles Hoffman and played by David Wayne—attempts to portray a motif-crazy villain putting his modus operandi on hold. Early in the story, the Hatter tells his female companion that he’s concerned less with stealing rare hats—as his comic-book predecessor did—than with using hats to steal.

Nevertheless, “Cowl” has a minor distinction, for it’s most probably the last episode to borrow anything from a comic-book original. “The 13th Hat” derived most of its elements from a 1956 comics-story, but did not use one incident in which Batman’s cowl was temporarily contaminated by radiation. Hoffman clearly remembered this tidbit and worked it into “Cowl,” in part because Hatter still wants to collect Batman’s headpiece—and for the same motive as in the earlier tale; to signify Batman’s defeat and death.

In a sense, the Hatter gets his wish, at least for a few days. He pulls a hat-based crime that lures the crusaders to make the scene, and then zaps Batman’s cowl with a radioactive spray, which turns the material pink. Batman staves off radiation poisoning with the usual Bat-paraphernalia, but he can’t change his colorful headgear because Alfred has all the other cowls in the wash. (Later, when Hoffman needs Batman to have a normal blue cowl available, this detail is forgotten.) Hatter next lures the duo to a laboratory, hoping to lift the irradiated cowl and finish off Batman and Robin. Despite being prepared for the villain’s dirty dealing, Batman and Robin get trapped into a radiation chamber and get turned into costumed skeletons:

Or rather, that’s what the crusaders decide to let the world think. Ostensibly the goal is to lure the villain into a false sense of security. Since Hatter’s score is not any more momentous than that of any other guest villain, one might suspect Batman and Robin of fishing for compliments. The Commissioner, Aunt Harriet, and the rest of the world goes into prolonged fits of mourning, and tributes to the fallen heroes appear everywhere, even in Soviet Russia. Though Batman and Robin remain absent, Bruce and Dick return to Wayne Manor, and in the episode’s best scene, Bruce attempts to allay Aunt Harriet’s grief by claiming that he thinks the crimefighters are yet alive.

After all this hue and cry, the ensuing revelation of the Mad Hatter’s plot and the big concluding fight-scene prove something of a letdown. David Wayne again plays the Hatter with gusto, and when his henchmen make an incautious comparison between him and other Gotham villains like Joker and Penguin, he refers to his peers as “phonies.” Given the Hatter’s turn-of-the-century attire, perhaps he thinks of himself as embodying a standard of villainy that other criminals cannot measure up to.

Posted by Gene Phillips at 2:21 PM
Email ThisBlogThis!Share to TwitterShare to FacebookShare to Pinterest
Labels: combative adventures, the marvelous