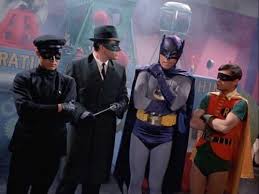 By the time this crossover episode aired, it probably came too late to boost the ratings of THE GREEN HORNET, which the same producers had launched in response to the success of BATMAN. As TV crossovers go, it’s satisfactory enough, though Charles Hoffman’s script suffers from a weak villain—created to be weak, one might think, so as to not distract from the four crimefighters too much.
Though the Green Hornet (Van Williams) and Kato (Bruce Lee) have their own city to patrol—wherein they pose as wanted criminals in order to get the goods on real crooks-- for unspoken reasons they decide to investigate a criminal in Gotham City. Said malefactor is Colonel Gumm (Roger C. Carmel), the foreman of a stamp-making factory owned by heiress Pinky Pinkston (Diane McBain). Gumm’s main perfidy is that using his employment as a cover for counterfeiting rare stamps and selling the illicit items to collectors,,though by the episode’s conclusion he also plans to rip off a famous rare stamp known as “the Gotham Gothic.” He’s apparently outfitted the factory with super-villain weapons in case of crimefighters, though for once we have a villain who's not trying to garner attention for his crimes.
Gumm's boss Pinky is somewhat of an anomaly in the Bat-series. Though she acts like a society airhead, dressing all in pink and pretending to talk with her Maltese dog Apricot, Pinky proves to be reasonably clever. She's suspicious of Gumm early in the episode, and when the villain kidnaps her, she finds a way (however preposterous) to leave a trail for the crimeifhghters. Moreover, she’s socially acquainted with both Bruce Wayne and Britt Reid, the respective civilian identities of Batman and Green Hornet. The precise backstory between Bruce, Britt and Pinky is not laid out. It's only stated that Bruce and Britt have been “rivals” for some time, possibly over Pinky, though she never makes romantic overtures toward either man. Thus their attempts to charm her may reflect more male rivalry than actual interest in the woman. Of course, the main purpose of the rivalry is to prefigure the inevitable conflict of Batman and Robin with the Hornet and Kato-- though in some ways the Bruce-Britt conflict is more interesting.

All four crusaders turn up in Gumm’s factory and get mousetrapped. Having Gumm trap Batman and Robin on an “undetachable glue pad” is no worse than many other larger-than-life perils in the series. However, the Hornet and Kato are subjected to one of the series’ stupidest deathtraps: feeding them into a machine that will supposedly turn them into giant stamp-reproductions of themselves. It’s a minor consolation that this does not actually happen, though the villain seems to believe it’s actually possible—and once again, we see a writer indulging in cartoony silliness, such as would become common in the third season.

There are a handful of moderately clever moments amid this tomfoolery. The “window-climbing” guest-star, actor Edward G. Robinson, makes an appearance in order to hype his reputation as a real-life art expert, which involves sneering at the very “pop art” that helped give rise to the BATMAN series. Robin does a role-reversal in which he assumes a dominant attitude toward his senior partner, though at the episode’s end Batman’s still the only one astute enough to guess that Hornet and Kato are really good guys. But the episode’s highlight is the big climactic fight, in which the Dynamic Duo battle both Colonel Gumm’s goons as well as Hornet and Kato. It’s a better choreographed fight-scene than the average Bat-battle, even if the heroes of the two respective serials are obliged to fight to a draw.
Posted by Gene Phillips at 4:25 PM
Email ThisBlogThis!Share to TwitterShare to FacebookShare to Pinterest
Labels: combative adventures, the marvelous