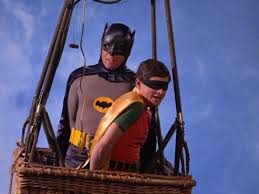 Purportedly, after appearing as the Riddler in the 1966 theatrical movie, Frank Gorshin refused to reprise the role for the same money. One consequence was that writer Fred de Gorter had to revise a script for a Riddler episode into one featuring a new villain, the Puzzler, essayed by Maurice Evans.

Puzzler keeps the Riddler’s obsession with leaving clues for his caped adversaries—“a crime is nothing without a modus operandi,” he tells his female associate—though by this time in the series, it’s easier to name off villains who didn’t leave clues than those who did. Puzzler’s puzzle-clues are much more vague in form than Riddler’s riddles, and thus the crusaders indulge in a lot more logical leaps than in most Riddler-episodes. Further, where the Riddler was manic, the Puzzler is cool and calculating, and certainly doesn’t get mixed up in banal fisticuffs. I assume that his tendency to lob Shakespearean quotes at all and sundry came from the actor’s best-known television role, the equally quotation-happy father to Samantha Stevens on “Bewitched.”

Puzzler’s other main obsession is with aviation, and I would presume that this motif was one de Gorter had planned to graft onto Riddler, much the same way that the riddle-fiend started harping on wax-gadgets in “Ring of Wax.” Puzzler’s main scheme involves bilking billionaire Artemis Knab—an obvious Howard Hughes spoof—out of the plans for his new jet-plane, and to that end, he gives his henchpeople nicknames like “Rocket” (the aforementioned female associate) and “Ramjet.”

Though I didn’t like the Puzzler back in The Day, his one episode is fairly strong. The proficity of references to the Bard provides some amusement, particularly when Batman, for no particular reason, starts reading one of his lines with the stilted intensity one expects of Shakespearan performances. Henchgirl Rocket O’Rourke falls into the category of molls who turn to crime as a quick path to fame and fortune, but doesn’t prove interesring in any other way. Puzzler’s episode is most distinguished for an above-average deathtrap: having the bound crusaders floating into the heavens aboard a hot-air balloon. Their escape depends partly on Robin’s mastery of birdcalls—foreshadowed in the episode’s opening scenes—and partly on the bad littering-habits of one of Puzzler’s thugs.

Posted by Gene Phillips at 2:05 PM
Email ThisBlogThis!Share to TwitterShare to FacebookShare to Pinterest
Labels: combative adventures, the marvelous