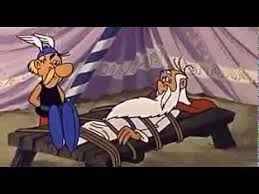 
While I generally like films adaptations to be reasonably faithful to their source material, there’s such a thing as showing too close a fidelity.

The French comics-series ASTERIX might be described as “Popeye the Sailor in ancient Europe.” Set in the days when Imperial Rome had conquered most of the continent, Julius Caesar—the series’ most frequent “villain”—learned that all of the Romans' military power could not vanquish one small tribe in Gaul. The hardy Celts of this tribe possess a super-strength potion, brewed by their local druid, and just as Popeye would be invigorated by his spinach, the warriors only need drink a swig of the potion to obtain strength that can pummel whole legions into submission. In fact, not only do the Gauls not require messy weapons like spears and arrows (this being very much a juvenile series), they only need two fighters to repel all hostile forces—namely, the titular Asterix, a diminutive but canny combatant, and his hulking but not too bright buddy Obelix.

The reader of the first comics-album learns about the characters of the tribe(most of whom have the suffix “-ix” in their names), and observes mighty Caesar sending a spy into Gaul to learn the tribe’s secret. The spy succeeds insofar as the Romans learn that the Gauls have a special strength-potion, but after a lot of slapstick antics, the invaders are right back where they started: they may know how the Celts can beat them back, but they can’t do anything to break the stalemate—which thus becomes the status quo for the remainder of the series.

And as for the animated film. Well—it’s the exact same story, from first to last. I didn’t do a scene-by-scene comparison, but I’ve rarely seen a film adaptation that followed its source so accurately. Given that the original story is not any sort of classic, even within the halls of popular culture alone, ASTERIX THE ANIMATED FILM proves something of a bore. 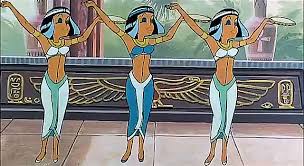 Possibly I enjoyed the next film in the series, ASTERIX AND CLEOPATRA, a bit more because I hadn’t read the album in some time, if at all. However, I noted that the filmmakers seemed to have had a freer hand in this adaptation. For one thing, while the original certainly would have supplied its fair share of slapstick violence, CLEOPATRA the film shows a greater will to come up the sort of slapstick that can only work in animation. For instance, one scene pits Asterix and Obelix against a ship full of marauding pirates. While the comics-album may have featured some of the same stunts, the movie surely expanded on the action, simply because an animated film has the luxury of suggesting real motion.

The setup again testifies to the serial’s juvenile focus. While older readers might be fascinated with the alleged romance of Cleopatra and Julius Caesar, here the emperor and the Egyptian queen are concerned not with getting bedded but with winning a bet. For no apparent reason, Caesar disparages the Egyptians’ ability to build ordinary houses, claiming that they only excel with pyramids. Cleopatra swears that she will have her chief architect construct for Caesar a fabulous palace within three months. However, chief architect Edifis knows that he can’t pull this off with the workers and materials he’s got, even though the price of failure will be his own life.

Fortunately, Edifis somehow has a personal acquaintance with Getafix, the druid of Asterix’s village. The architect voyages all the way to Gaul and convinces the druid and the tribe’s two favorite warriors to come to Egypt. (Nothing is said as to who’s empowered to stave off the Romans while Asterix and Obelix are gone.) After various hiccups, the foursome return to Egypt, and Getafix distributes the magic potion to the Egyptian workers, so that they can work super-fast. However, Edifis has an architect-rival, Artifis, who seeks to block the building project—and Caesar, when he finds about the presence of the Gauls, enlists his own forces to prevent his losing the bet with the queen.

It’s all very silly stuff, but at least it’s silly-clever rather than silly-stupid. The film even sports a couple of songs that almost certainly were not in the comics-album. 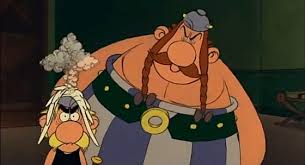 THE TWELVE TASKS OF ASTERIX appeared about nine years later, and stands as the only Asterix animated film to be produced from an original script. That said, this did not signify a deviation from the vision of the comic's creators, since those creators, Rene Goscinny and Albert Uderzo, authored said screenplay. Arguably, TWELVE improves upon the two films that adapted comics-stories in terms of coming up with clever jokes-- though it's still a pretty simple juvenile tale, as well as one that more or less "rewrites" the serial's status quo for the sake of an end-joke.

Just as CLEOPATRA started with an absurd bet, TWELVE begins with an absurd proclamation by Julius Caesar. Since his forces have for years tried and failed to overcome the Gauls of Asterix's village, Caesar-- who in previous installments had been made aware that the Gauls have a magic potion that makes them superstrong-- suddenly posits the idea that the Gauls may be gods, which would mean it's pointless for Rome to fight them. Caesar then travels to the Gaulish village and issues a challenge. He proposes that Asterix and Obelix should attempt to complete a series of twelve tasks-- inspired by, but not patterned after, those of archaic Heracles. The stakes: if the Gauls lose, they bend the knee to Rome, while if they lose, their little tribe will take the reins of the Roman empire. The Gauls don't especially want the Roman empire, and it would seem that the status quo works to their benefit, but for whatever reason our heroes accept the challenge.

What follows is inevitably a very episodic film in which Asterix and Obelix overcome various opponents. Most of these are simple jokes, like showing the Gauls' encounter with Far Eastern judo (through the medium of a German practitioner) or having Asterix reverse the hypnotic spell of a mesmerist. The strongest segments are the episode in which the duo must resist the blandishments of the sultry Sirens, and the one in which they must seek to escape the terrors of a mammoth bureaucratic office. Naturally, the doughty warriors complete all of their tasks, and win control of the Roman Empire-- which, as Asterix notes, is possible because "it's only a cartoon."

Posted by Gene Phillips at 1:33 PM
Email ThisBlogThis!Share to TwitterShare to FacebookShare to Pinterest
Labels: combative comedies, the marvelous