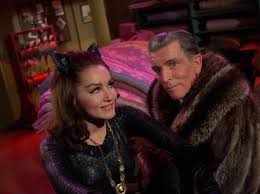 
Catwoman, once again essayed by Julie Newmar, has the honor of being the first established super-crook to participate in one of the series’ vaunted team-up episodes, albeit with a brand-new guest villain, “continental criminal” Sandman (Michael Rennie). To be sure, though, scripters Ellis St. Joseph and Charles Hoffman slant the episode in favor of Sandman.

The big score this time is not unlike the one in “The Devil’s Fingers,” in that Sandman plans to hoax a wealthy dowager into marrying him, so as to rob her blind. The woman in question is J. Pauline Spaghetti (Spring Byington)—patently named after famed magnate J. Paul Getty. Pauline suffers from protracted periods of insomnia, so Sandman poses as a famed sleep-physician in order to gain her confidence. Catwoman’s only role in this plot would seem to be one  any comely actress could have performed, in that the villainess simply poses as a patient who recommends “Doctor Somanbula.’ Indeed, when Catwoman appears on TV making her pitch, even the dimwit cops recognize her, which gives the caped crusaders forewarning of Sandman’s scheme.

Once Sandman takes a meeting with Pauline, he simply overcomes her insomnia with an artificial anesthetic. Batman and Robin are unable to prove to Pauline the phony doc's scurrilous intentions, so they track him to his lair. Sandman’s four thugs overcome the Dynamic Duo—for once, without resorting to special tricks—and Sandman temporarily brainwashes Robin, so that the Boy Wonder himself pulls the lever on Sandman’s deathtrap-of-choice. Batman escapes in a way that’s improbable but not particularly ingenious, while Sandman—who plans to cut Catwoman out of the Spaghetti fortune—gives the villainess a consolation prize in the form of Robin. Batman tracks down Catwoman and frees Robin, after which they corner Sandman and his thugs at Pauline’s spaghetti-facrory and trounce the European evildoer.

“Sandman” is certainly a mixed bag. Catwoman, who apparently has been paroled once again, doesn’t really have anything to do but hang around her Catlair while waiting for Sandman to execute the score. True, the scenes in which she tortures Robin in an electrified maze are one of the episode’s high points, and she does get to have a few minutes of romantic badinage with Batman. But the ease with which Sandman gulls the Princess of Plunder shows an unfortunate tendency of the show’s second season, that of having villains do dumb things because the script requires the dumbness. If anything, the Gotham cops ccme off a little better here than they usually do. For once, they’re proactive with a repeat offender, sending a policewoman to masquerade as one of Catwoman’s henchladies. However, Catwoman detects the ruse early in the episode’s first part, so that the unfortunate lady cop has no role but that of subordinate victim. On a more expected note, when Commissioner Gordon is about to launch into one of his effusive enconiums of the Dynamic Duo, Batman simply cuts him off by saying, “Please don’t”—which may betoken impatience more than heroic modesty.

The corn quotient goes up once more, particularly in a dopey scene where the Bat-computer exudes literal spaghetti in order to signal Pauline’s name to the confused crimefighters. Arguably as bad is a protracted scene in which a rookie cop tries to arrest Batman for leaving the Batmobile unattended. However, one of the best “good camp” scenes appears when Pauline gives Sandman a tour of her factory, explaining in loving detail about all of the previous husbands who just happened to perish in various spaghetti-making devices. One cannot help but wonder whether the sweet-seeming old lady may in fact be the only criminal the crimefighters never bring to heel: a serial “black widow” killer. Maybe that’s the reason she can’t sleep well. Early on she does mention falling asleep at a rock concert, and near the end she at last falls into a peaceful doze while watching the big fight between the heroes and the villains, perhaps in the sure and certain knowledge that as a wealthy woman she's immune to their level of conflict.

There's also an amusing gaffe in the big fight-scene, when Sandman and two thugs have already started fighting the heroes, and Sandman whistles for aid-- but no one, not even the other two thugs seen earlier, shows up.
Posted by Gene Phillips at 2:14 PM
Email ThisBlogThis!Share to TwitterShare to FacebookShare to Pinterest
Labels: combative adventures, the marvelous