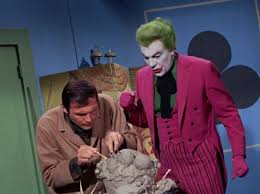 With more work, Stanford Sherman might have turned this episode into an irony-laced assault on modern art—including, with even more irony, the fad of “pop art” that helped sell BATMAN ’66 to studio heads. But though Sherman does include a number of wry comments about the art scene, the whole never proves greater than the sum of its parts.

The opening scene, for once, doesn’t show the Joker executing some carefully laid plot. He appears at a modern art galley with some thugs, and proceeds to spray-paint several alleged masterpieces. Given that the character never justifies his actions, one can only suppose that he’s a traditionalist, and just doesn’t like what he deems bad art, at one point crying, “Away with dullness.” Batman and Robin show up and clean his clock. However, before they can take the supercrook to the pokey, an esteemed artist proclaims that the mutilated paintings are better art after being spray-painted (a possible sneer at Jackson Pollock, perhaps). Similarly, without the villain even making any effort, various empty-headed art-lovers attach themselves to the alleged New Face in Art, and Joker immediately forms his own art-school to take advantage of these dunces. The biggest duncecap goes to heiress Baby Jane Towser, who helps Joker gain acceptance in the art world, by claiming that his banal paintings signify things like “the emptiness of modern life.”

The Clown Prince of Crime naturally can’t content himself with simply sponging off rich fools, and Batman suspects as much. In the identity of Bruce Wayne the crusader goes undercover as a student at Joker’s art school, and the best scenes are those in which the two old enemies snarl at each other, even though Joker has no idea of Wayne’s true identity. Sure enough, Joker decides to hold all the rich fools for ransom. Wayne isn’t able to get away and don his Bat-garb, so Robin charges in alone. Despite assistance from the millionaire playboy, Robin is overcome and put into a deathtrap, while Wayne is tied to a chair so he can watch. The trap and the escape are both just average.

In the second half, Joker is apprehended but Baby Jane helps him dodge any charges because he’s just an eccentric artist. Indeed, Joker himself remarks on the moral neutrality of art, claiming that, “We artists aren’t required to be nice, only talented.” The script then loses its focus in the last few scenes, as Joker flees Batman’s wrath, seeks out Wayne’s mansion to swipe some easy cash, and gets summarily humiliated by Alfred.

Posted by Gene Phillips at 4:41 PM
Email ThisBlogThis!Share to TwitterShare to FacebookShare to Pinterest