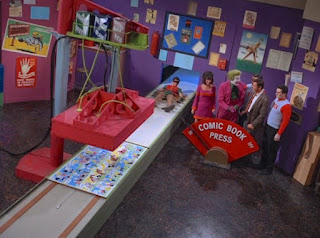 
Next to the vapidity of “The Impractical Joker,” “Laugh” is at least a return to decent form. Peter Rabe and Lorenzo Semple provide the villain with one of his more worldly operations—a simple counterfeiting scheme. It’s a nice touch, though, that Joker’s cover for the project happens to be that of publishing the sort of periodicals in which he and his opponents were born: comic book magazines. To be sure, the script never lets viewers see what sort of comic books the Clown Prince unleashes upon Gotham, and the script doesn’t really exploit the connection between the medium and the characters cavorting on the small screen.

The villain’s venture into super-science is also given a comic rationale, in that Joker now controls three super-strong robots, which he learned how to make thanks to some prison educational class, according to what he tells his moll Josie Miller (patently named for “Joe Miller’s Joke Book.”) Though this time Joker doesn’t issue any teasing clues to the heroes, he does provoke the good Commissioner by setting up a recording of his manic laughter in the aggrieved top cop’s office. This action proves enough reason for the duo to connect the fiend with the ongoing appearance of counterfeit money. They make the connection to the comics-company on the assertion that the comics use the same hues found in federally printed currency.

Joker is somewhat pro-active this time, trying to track the crusaders back to the Batcave, only to be foiled by Batman’s “Bat-deflector”—giving Cesar Romero the opportunity to wax wroth at his foes. Nevertheless, the crimefighters are forced to compile evidence of Joker’s crimes. Assuming the form of Bruce Wayne, the Cowled Crusader barges into the villain’s publishing house, spinning a story about his facing embezzling charges for speculation with Wayne Foundation funds. He then attempts to persuade Joker to print him some funny money to get himself off the hook, and rather bizarrely, both Joker and his moll seem to buy it. However, as soon as Joker has printed some counterfeit bills, Robin charges in, attempting to arrest the villain and his coterie of hired thugs. Even with Wayne surreptitiously helping the Boy Wonder, the bad guys triumph—and the deathtrap proves appropriate: attempting to use a comic-book printing-press to make Robin as flat as the character from whom he descended,

In addition to not getting the goods on the Clown Prince, Batman’s gambit backfires in a number of ways. First, in order to gain Joker’s co-operation, Wayne had to offer him the position of vice chairman at a Gotham bank where Bruce Wayne has pull. Thus Joker and his robots set up shop at the bank, apparently dropping the counterfeiting scheme—and the heroes can’t figure out the villain’s next move. Joker tries to gain a hold over Bruce Wayne by playing a recording of the millionaire’s supposed infamy, but when Wayne refuses to be blackmailed, Joker resorts to a backup plan: having Josie pounce on Wayne and claim that the two of them were secretly affianced. On top of all this, Gotham’s top cops decide that Bruce Wayne must have gone crazy when he appointed Joker to the bank, so Batman briefly suffers the humiliation of being sentenced to a loony bin. Joker’s plans for the bank are never fully revealed, for the heroes find a way to short-circuit the robots so that they commit criminal acts—which is technically called “framing,” though no BATMAN viewer probably really cared. After Joker and his robots are vanquished, there’s a small turnaround in that for once a villain’s moll doesn’t go goony over Batman. Rather, she tells the crusader to tell Bruce Wayne that she would’ve liked to know him better—which might strike some people as “six of one, half dozen of the other.”

Posted by Gene Phillips at 4:04 PM
Email ThisBlogThis!Share to TwitterShare to FacebookShare to Pinterest
Labels: combative adventures, the marvelous