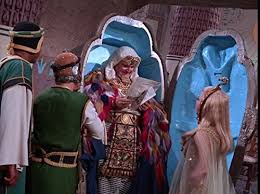 
The third outing for King Tut, scripted by Stanley Ralph Ross and the team of Leon and Pauline Townsend, starts off with the Egyptian evildoer back in his identity as a Yale professor. However, some crumbling masonry hits him on the skull—as well as clobbering a couple of nearby students. Thus King Tut lives again, and two of his servants are even in on the delusion.

The script doesn’t trouble to give the royal robber a scheme for dominating Gotham City. This time, the obese overlord just wants someone to love. Tut decides that Lisa Carson, daughter of a rich Gothamite, is the reincarnation of Cleopatra, simply because she dresses as Cleo for a masquerade party. No one bothers to point out that the historical versions of Cleopatra and Tutankhamen lived in different eras, naturally. For once Tut “counts coup” on Batman, in that millionaire Bruce Wayne has been dating Lisa occasionally—which is very nearly the only time Wayne comes close to justifying his image as a “playboy.”

There’s also an odd touch in that Tut already has a moll, one Nelia (Grace Lee Whitney), and there’s a brief suggestion that Nelia and Tut have done a little more than verbal dalliance. This suggestion plays a minor role in the script when Nelia actually tries to free Robin from captivity so that he’ll remove Lisa from Tut’s overbearing attentions, purely with the idea of saving the king for herself. There’s a decent enough deathtrap and trap-escape, but I suspect that the priority of the writing-team was to come up with as many acidulous lines as they could for Victor Buono—and he chews the scenery in grand form, particularly in describing the terrible things he’d like to do to Batman.

That said, the hero, in both of his identities, gets two of the best lines. After the climactic fight, Tut reverts to his normal persona, and bemoans his fate in the legal system—whereon Batman borrows from an old Teddy Roosevelt speech, solemnly declaring that, “no man is above the law, and no man is below it.” On a much lighter note, the coda shows Bruce concluding a date with Lisa, accepting her invitation into her apartment for “milk and cookies,” because (as he tells the audience) “Man cannot live by crimefighting alone.”

Posted by Gene Phillips at 4:35 PM
Email ThisBlogThis!Share to TwitterShare to FacebookShare to Pinterest
Labels: combative adventures, the marvelous