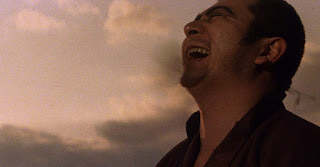 Everyone’s favorite blind samurai-masseuse made his ninth appearance in this amiable if unremarkable melodrama.
The itinerant hero, journeying through medieval Japan on his way to a sacred festival, meets a man who asks the blind fellow to deliver a message. Zatoichi presumes that it’s a love letter. In truth the young man is in hiding after having been implicated in Yakuza business, and the recipient of the letter is the fellow’s sister. Once Zatoichi knows the truth, he’s unable to keep from involving himself in the young man’s troubles, even though the local Yakuza have their own pet samurai.
There’s a second family-oriented subplots, though they aren’t as persuasive as the main conflict, or even a throwaway moment when Zatoichi reminisces about his being abandoned by his father. Perhaps that’s why he travels around, lending his talents to the needy-- not just out of altruism, but as a deferred act of familial defense?
The only downside is that the blind hero’s uncanny swordfights are usually over too quickly to prove very impressive.

Posted by Gene Phillips at 3:01 PM
Email ThisBlogThis!Share to TwitterShare to FacebookShare to Pinterest
Labels: combative adventures, superlative skills (u), the uncanny