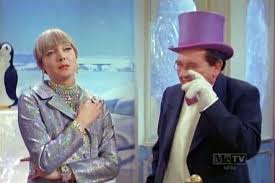 Though I deem “Marsha, Queen of Diamonds” to be one of the weakest villains created for the Bat-series, her creator Stanford Sherman accomplished a minor feat in this episode, for in her last appearance I found the character at least bearable.

To be sure, she wouldn’t have worked so well had she been teamed with another weak villain, such as Sandman. But here she’s teamed with the Penguin, and for once, the Birdman Bandit gets a script worthy of his character-strengths. Both on the TV show and in the comic, it’s easy for writers to write Penguin as a buffoon. But he works best when he’s shown to be capable of inventive crimes. His ingenuity is the proximate cause of his tremendous ego and resultant pomposity, and both of these can trip him up. Given the role of ironic humor in BATMAN ’66, it’s not surprising that many of the scripters chose to emphasize Penguin’s foolishness, which gave Burgess Meredith the chance for assorted comic turns, from slow burns to squawking rants. But “Friend” manages to concoct a clever scheme for the archvillain while still permitting him plenty of opportunities to fume and fulminate against his caped opponents.

Where “Death in Slow Motion” provided a light-hearted salute to the history of early cinema, “Friend” spends a great deal of time taking shots at then-contemporary Hollywood. Penguin, once more on parole, organizes a movie company and hoaxes Batman and Robin into signing contracts to perform in a film. Or rather, he thinks that he hoaxes them, for Batman perceives the setup and goes along with Penguin’s plot in order to smoke out the evildoer’s plans. As for the Queen of Diamonds, Penguin needs Marsha to finance his phony movie venture. There’s no indication that she went to jail as the result of her last caper, so one might speculate that an expensive lawyer might have got her off. In any case, Marsha’s still flush enough to finance Penguin’s picture, as long as the Queen gets the chance to play love-scenes with the Cowled Crusader. The first segment is replete with many spoofy refereneces to the opulence of Hollywood historical epics. Perhaps the most erudite of these in-jokes is the mention of a “milk bath,” which is probably Sherman’s recollection of a similar piece of exotica in Cecil B. DeMille’s THE SIGN OF THE CROSS. That said, Penguin puts a particularly salacious scene in his historical epic, and though Sherman never reveals the nature of the objectionable content, one assumes that it might be less in line with DeMille than with a seventies production like CALIGULA. However, a local decency club, headed by the redoubtable Aunt Harrier, shuts down Penguin’s attempt to become the founder of “porno chic.” Madge Blake and Meredith play well off one another, though neither seems to remember having encountered the other in “The Penguin’s Nest.”

Though Marsha fails to enslave Batman with her love-potion lipstick, Penguin has better luck overcoming the duo and sticking them in a medieval-themed deathtrap, from which they escape in improbable fashion. When the crusaders return to the studio, attempting to mend fences with the villain, Penguin abandons whatever plan he had to use them in his movie project and kicks them out. However, the astute senior crusader hoaxes the villain into believing that the noble Batman has been bitten by the acting bug, which gives Penguin enough confidence to invite them back—which in turn leads to a second deathtrap, this being the second of the season’s three-parters.

The escape from the second deathtrap registers no better than the first, but Penguin’s insidious plan begins to come together in the third segment. Perhaps the best thing about Sherman’s script is that in contrast to many other Bat-plots, neither the heroes nor the viewers know the villain’s scheme until the last part of Segment Three. In short, Penguin makes a very special assault upon Gotham’s subtreasury building, in order to emulate Goldfinger and spirit away all the gold therein. Contrary to the first segment’s claim that Penguin onlywanted Marsha for her money, the diamond-queen plays a vital role, performing a “dance of the seven veils” to get past the subtreasury’s guards. In addition, Marsha’s Aunt Hilda, the dotty would-be witch, also makes substantial contributions to the big score, and even though she’s still not funny, at least this time she’s much more integral to the narrative.

In addition to the jokes about the movie biz, “Friend” also tosses in a few barbs agains the military, here represented by the officers of “the Hexagon.” But the most outstanding aspect of the episode is that it gives Meredith his best outing in the role of the Birdman Bandit. As for Marsha, at least she’s not like some fickle villainesses, turning her back on crime at the sight of Batman’s manly physique,