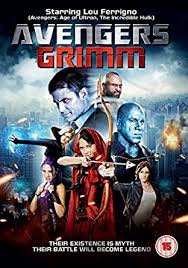 There’s a long if not vernerable tradition of cinematic piggybacking, wherein a cheaply made film emulates some aspect of a more expensive production in order to profit from the latter film’s high profile. On occasion the imitative film occasionally to be something of a mirror image to the film imitated, as when THE INCREDIBLE SHRINKING MAN was followed by THE AMAZING COLOSSAL MAN. A few such imitators are at least deent if unexceptional entertainments, as is the case with COLOSSAL MAN. However, some imitators—particularly the “mockbusters” of recent years—don’t offer even rudimentary story values.

It goes without saying that most of the piggybackers are derivative crap. AVENGERS GRIMM, though, seems to have been undertaken to see if it could win some reputation for being crappier than the crappiest. I imagine some conversation wherein the head of the Asylum Studios floated the idea of mockbusting Marvel Studios’ AVENGERS franchise. He would’ve been duly advised that Disney, the owners of the franchise, would have sued the company into the ground if they even attempted doing mock versions of the Marvel superheroes, even if the Asylum did get away with mockbusting THOR. Then, in this imaginary conversation, the studio head gets the idea: instead of mocking superheroes, they’ll use the public-domain characters of folklore as their heroes. One critic alleged that the Asylum scripters might have also been swiping from the ABC series ONCE UPON A TIME. Yet, given that Disney built its empire in large part on adapting folklore and children’s stories, that alone may be the reason the heroes of AVENGERS GRIMM are all a bunch of folkloric princess-types.

Like many mockbusters, the narrative consists mostly of a lot of pointless running around. Rumpelstiltskin (Casper Van Dien) tries to take over the fairy-tale kingdom ruled by Snow White. As the two rulers battle in Snow’s courtroom—the only part of the kingdom the viewer ever sees—both of them fall through a portal that takes them to the more mundane, and less expensive, realm of Earth. Three of the other heroines—Cinderella, Rapunzel and Sleeping Beauty—follow to assist their queen, while the one badass girl in the group, Red Riding Hood, goes to Earth in search of her enemy the Wolf. For no particular reason, six months go by between the two portal-jumps, so that by the time fhe other four heroines arrive on Earth, years have passed for Snow and her enemy. She hasn’t done a whole lot with herself during that time, but Rumpelstiltskin has assumed a human identity, Mayor Heart, with his own supernatural police force and plans for conquering the whole world. This leads to a lot of poorly organized and poorly choregraphed battles, with the heroines being joined by a man who literally turns to iron, Iron John (Lou Ferrigno).

Ferrigno and Van Dien, the sole name actors, are also the sole attractions in this mess. And of the two, Van Dien is the only one who has a little fun with his villainous role, while Ferrigno is, as always, Ferrigno.

Posted by Gene Phillips at 1:02 PM
Email ThisBlogThis!Share to TwitterShare to FacebookShare to Pinterest
Labels: combative adventures, the marvelous