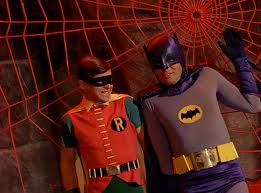 
Robert Mintz’s script ptopounds a new villain with whom the Dynamic Duo have already contended: the Black Widow (Tallulah Bankhead). However, whenever the villainess interacts with the duo, none of them really seem to be well acquainted with one another, in contrast to the way the heroes interact with other first-time fiends like False Face and Bookworm. When the Widow tells the crimiefighters that she finds them to be crashing bores, she acts as if it’s the first time she’s ever encountered them.

Black Widow falls into the same category as Archer, Sandman and Marsha in being a collection of villainous “tics” with no hint of psychological consistency. Possibly Black Widow’s dominant motifs—brainwashing bank officials with a memory-gadget, and using various spider-based weapons—found inspiration in the fate of her presumably late husband Max, since she would be a literal “black widow” if she killed him off. But all we know of Max is that he was wont to uttering clichés like “Money can’t buy happiness,” to which the Widow replies, “Happiness can’t buy money.”

For no particular reason, Black Widow uses her memory-gadget to rob all the banks in Gotham, going in alphabetical order. (Convenently, Gotham happens to have a bank for every letter from A through H.) After the duo consult their Bat-computer—once more, a source of dopey sub-juvenile humor—they trail Black Widow to her hideout with an “olfactory detector.” As usual the villain mousetraps the heroes and subjects them to a deathtrap without either removing their utility belts or staying to watch them perish, with the usual results.

The villainess, who speaks all of her lines with a droll attitude suggesting she considers herself above this folderol, does perpetrate one humiliation on Batman. By subjecting him to her memory-gadget, the crimefighter temporarily loses his moral compass, so that anyone can t\alk him into anything. While Robin is a captive and Batman is incapacitated, the villainess goes out on another bank-robbing caper, this time dressing up as Robin and taking along a dummy Batman. Robin does reverse Batman’s mental ennui by encouraging the crusader to sing something. The world presumably will never know why the Gotham Guardian chooses a selection from “The Mikado.” But if anything proves memorable about this dull episode, it would be the sight of Adam West singing, “Poor Little Buttercup I.”

Posted by Gene Phillips at 4:38 PM
Email ThisBlogThis!Share to TwitterShare to FacebookShare to Pinterest
Labels: combative adventures, the marvelous