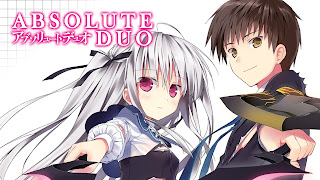 This 12-episode anime TV show didn't run nearly as long as the original light novel series or the manga,. Even without having read either of those, I tend to think a lot of action and characterization must have been crammed into these 12 episodes.

ABSOLUTE is one of many "teenagers learning about their special powers" concepts, and if there's any profitable comparison between such Japanese takes on the idea and serials like the American X-MEN, it's possible that the anime versions place much more emphasis on the disparate characters coming together to form a seamless unity. In partial compensation, animes based around teenagers are also replete with teen issues about friendship, romance, and fanservice.

As with EVANGELION and a host of other related concepts, the teens are forced to train their special powers to meet some extremely vague menace. In the case of ABSOLUTE, the menace is some anti-government force called "the Rebels," but the Rebels' origin and ideology is never known. The menace is just there to force all the teens together for maximum melodrama.

In this case, all ABSOLUTE teens have the ability to manifest solidified weapons out of their personal energies, and those weapons can take such forms as guns, swords, or, in the case of one main character, a gauntlet-shield. However, the super-teens are supposed to work in teams of two, and are expected to form "duos" with complementary fighters.

Toru, the fellow with the shield, bonds early on with a purple-haired Scandinavian nymphet named Julie Sigtuna, who can manifest twin swords. It seems a little counter-intuitive to make a female from Scandinavia, land of tall people, into a standard doll-like girl protagonist, but there you have it. Julie is also somewhat emotionally blank, which stems from a family trauma that supplies much of the melodrama. Being a foreigner also makes her an outsider to Japanese customs, so that she can insist on sleeping in Toru's bed (non-sexually) without seeming like she's overly forward. There are the usual melodramatic issues about forming a pair of warriors becoming a romantic couple, and these are no better or no worse than dozens of others. Most of the other students are comely, bouncy teen girls, and their arcs are probably somewhat adumbrated by the series' limitations. And even though the supposed villains don't do much here, the students have to cope with a manic teacher with two personalities, a busty woman who does her teaching in a getup reminiscent of a Playboy bunny.

On the whole, ABSOLUTE is not an absolute time-waster, but one could find better fare on which to waste one's time.

Posted by Gene Phillips at 6:56 AM
Email ThisBlogThis!Share to TwitterShare to FacebookShare to Pinterest
Labels: combative adventures, the marvelous